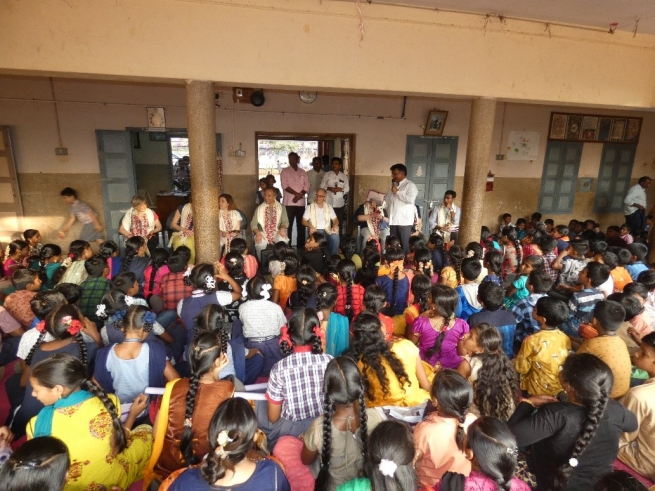 (ANS – Hyderabad) – The Salesian Province of St. Joseph, Hyderabad (INH), last month welcomed a few representatives of  the Salesian NGO “Missioni Don Bosco-Turin” to show them various social outreach programmes, institutions, schools and orphanages operated by the Province. Rev. Fr Thathireddy Vijaya Bhaskar SDB, Provincial of the Salesian Province of St. Joseph, Hyderabad, and Fr Bellamkonda Sudhakar SDB, Executive Director of the Planning and Development Office of the province, accompanied them in their visit to various communities in the province.

“Missioni Don Bosco” has been one of the major long-term benefactors for the Province, providing financial support for scholarships of poor children over the past few decades. Recently, the organization sponsored the education of hundreds of poor children in INH Province, who are now enrolled in schools.

On the first day of their arrival in India, Bro Giampietro Pettenon SDB, from the Mission Office of “Missioni Don Bosco”, and his travel companions could visit the “Don Bosco Human Resource Development Center” in Gagillapur. The purpose of this visit was to show how the Province in its mission with the charism of the congregation is educating and rehabilitating poor youth in the city of Hyderabad and the rest of the region.

Don Bosco Human Resource Development (DBHRDC) was established in 2010 to provide vocational training and job skills to poor youth in the city and across the region. Over the past couple of years, the centre has trained more than 1200 (average of 120 youth per year) poor youth with close to 100% job placement rate. The Centre provides training in hospitality, tailoring, plumbing, electricals, electronics, AC refrigeration, mobile phone repair, solar panel installation and diagnostics. The vast majority of students are from poor rural villages.

On the second day of the visit, they travelled to “Don Bosco Navajeevan” (DBNJ), Visakhapatnam, to witness various outreach activities and programmes being undertaken by the Salesians in Visakhapatnam, the largest city in the state of Andhra Pradesh and home to one of the largest ports on Eastern India.

The Salesians and the Province own and operate four campuses that serve orphaned and poor youth in the city, three campuses that serve as orphanages or ‘Navajeevan’ centres, and one campus that serves as a training centre for skill development for poor youth and education for very poor children. At Visakhapatnam, they could hear also three success story by three past-pupils of the centre.

The visitors were glad to see that the Beech Blossoms Bridge School operated by the Salesians in the city have helped educated 1,500 children and placed them into government schools over the past 12 years. They were very supportive of plans to demolish one of the Navajeevan center and replace it with a new facility that can grow to the outreach of the centre from 30 orphans to 100 in an integrated campus for staff, children, volunteers and Salesians.

On the third day, the guests travelled to St Michael’s Boys’ Home, Guntur, the first mission in the Province which started in 1964. Don Bosco Industrial Technical Institute is the oldest technical school in the Province. It provides certified technical training in electricals, electronics, motor mechanics, fitter and skill development in industrial printing. Around 200 students are currently residing at the centre and come from marginalized families.

While travelling from Guntur to Mangalagiri – to visit also the Don Bosco School, the second school established in the Province in 1974 and now part of a proposal to provide a standard education – the guests had stopped at Migrant mission started by Navajeevan Bala Bhavan (NJBB), Vijayawada. It was started in collaboration with the All India Institute of Medical Sciences (AIIMS). Fr Ratna Neelam, Director of NJBB, along with Mr Anto, explained the mission carried out among the migrant workers, with 41 boys and girls who are under 15 years of age, facing the hardest challenges, since builders and contractors do not cooperate with the Salesians.

On the final day, visitors reached Don Bosco School, Wyram, that serves a region that is poor and rural. “Missioni Don Bosco” helped the Province and the School construction, a new basketball court and the community. The School currently has around 300+ students who are receiving an education for the first time in a generation.

During the final meeting with the Provincial Father and his core team, Bro Pettenon said he was glad to see the spirit and charism of St John Bosco alive in the Province and stated that the Province was living out the mission in keeping with the wishes of the Rector Major in Turin. He expressed that the Province must work towards financial self-sustainability, and proposed four areas for the Salesians to focus upon: food, education, water and the welfare of women.