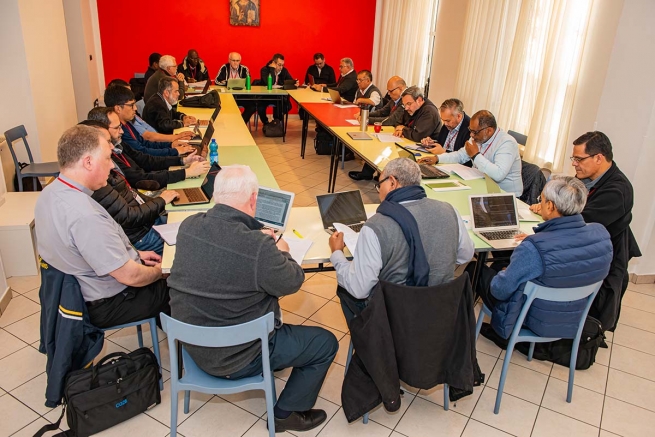 (ANS - Turin) - In the beginning homily, with the words of the 20th General Chapter, the Rector Major recalled that “True fidelity to Don Bosco consists not in copying him externally, but imitating Don Bosco in his fidelity to the motions of the Holy Spirit." And this is why February 19-20-21 are dedicated to reflection, study, prayer, personal talks: three days of spirituality and study to enter increasingly more into the General Chapter's atmosphere and contents.

On the aforementioned mornings, there are three meditation proposals offered by:

- Fr Rossano Sala, on "The priority of the Salesian mission among today's young people";
- Fr Eunan McDonnell, on: "The profile of the Salesian today";
- Fr Luis Fernando (Koldo) Gutierrez, on: "Together with the laity in mission and formation."

Hours of listening and personal meditation precede the Eucharistic Concelebration before lunch.

The two work sessions that follow in the evening are experienced in Regional groups. The aim of the study and talks is to "discern the priority challenges of the Congregation and identify the fundamental processes and interventions that must mark the 2020-2026 term."

A path therefore articulated, which foresees sessions for Commissions and the Assembly, personal study, group study, elaboration of a first summary document, reviewed and re-proposed by the Rector Major.

To help begin to summarize what has been elaborated in the Commissions, corresponding at first to the Salesian Regions, a group identified by the President is at work, made up of the following chapter members: Fr Gabriel Romero (ARN), Fr Igino Biffi (INE ), Fr Marcello Baek (KOR), Fr Pierre Célestin Ngoboka (AGL).

We are before the beginning of a sharing process that will certainly accompany the examination of Chapter's specific theme with a horizon projected onto local realities and to the Provinces for animation and government in the forthcoming six years.