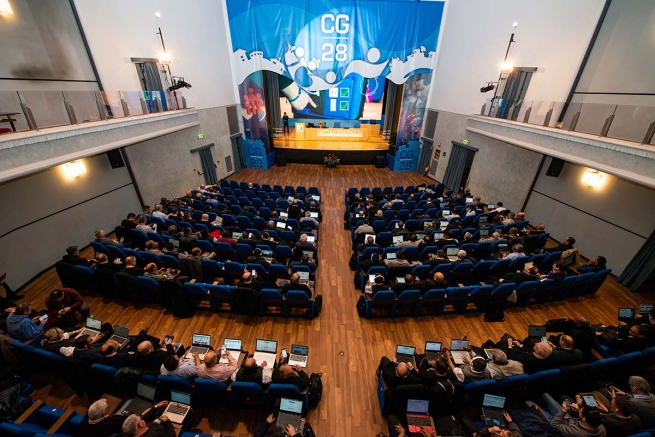 (ANS - Turin) - To bring the contents and spirit of the 28th General Chapter of the Salesian Congregation to all the Salesian houses across the globe, there is nothing better than making it possible for everyone to access Valdocco, at least online. For this reason, also considering the popular results obtained, the live broadcasts on ANS Facebook page have multiplied: already tonight, 20 February, at 7 PM (UTC+1) it will be possible to listen to the Salesian "Good Night" of the Postulator General of the Causes of Saints of the Salesian Family, Fr Pierluigi Cameroni; while on Saturday 22, the Mass and the official opening session of the GC28 will be broadcast.

After this first preparatory week to Chapter work, with the presentation of the reports of the General Council on the six-year term just ended and the introduction to the three thematic groups, next Saturday the GC28 will fully enter into the heart of the matter.

The opening Mass, in the Basilica of Mary Help of Christians, will be broadcast live in the original language at 8:00 am (UTC + 1). Subsequently, the official opening session will be broadcast from the Teatro Grande di Valdocco with the live broadcast available in four language channels (Italian, English, Spanish and Portuguese).

The participation by the Superiors Major and Directors of the Salesian Family will also be very large and of great importance. In fact, there will be:

- Mother Yvonne Reungoat, Mother General of the Daughters of Mary Help of Christians;

- Renato Valera, President of the Association of Mary Help of Christians (ADMA) Primary;

- the Presidents of the Confederations of the SDB and FMA Past Pupils, Michal Hort and Maria Maghini respectively;

- Dina Moscioni, General Coordinator of the Witnesses of the Risen One;

- Mother Graziella Benghini, General Superior of the Salesian Oblates of the Sacred Heart;

- deacon Guido Pedroni, General Custodian of the Community of the Mission of Don Bosco;

- Fr Joe D’Souza, SDB, founder and superior of the Disciples;

- Mother Teresia Furuki Ryoko, Superior General of the Sisters of Charity of Jesus;

- Sister Luigina Bellomo, Vicar General of the Apostles of the Holy Family;

- and Delegations and representations of other groups still.

After Mass and greetings, Fr Ángel Fernández Artime, Rector Major, will deliver the opening speech, at the end of which the Chapter Regulator, Fr Stefano Vanoli, will officially declare the GC28 open.