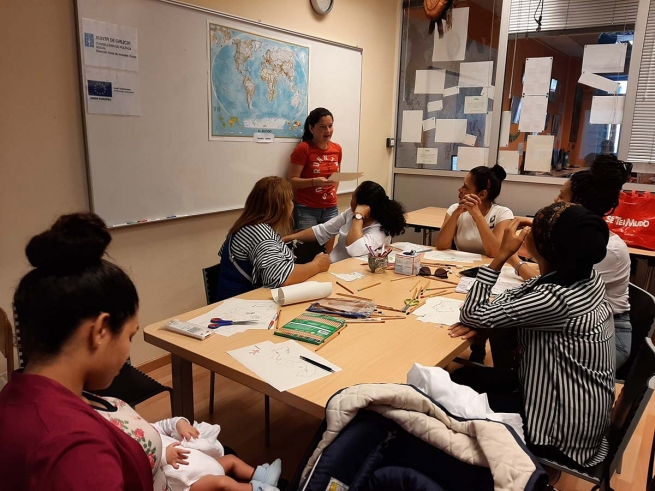 (ANS - Madrid) - "BoscoSocial" is a Salesian organization which groups together the work of three entities of social platforms spread in various autonomous Spanish communities: "Boscos" in the Basque Country, Navarra, La Rioja and Cantabria; "JuanSoñador" in Galicia, Asturias and Castile and León; and "Pinardi Federation" in Madrid and Castilla-La Mancha. Among the various programs supported by "BoscoSocial", those aimed at migrants stand out, both in terms of training for better access to the labor market and in terms of social support, with the creation of relationship groups between migrants to encourage integration into their new country.

Pinardi Federation, with young migrants. Abdalah is a 24-year-old Palestinian migrant from a refugee camp in Lebanon, part of one of the projects of the Pinardi Federation of Madrid. Helped by educators, Abdalah is taking many steps forward, as part of a project that seeks to offer him everything he needs in the country he has chosen in order to get out of his situation of injustice.

"Malaikas": women in a vulnerable situation. Many kilometers from the capital, in Galicia, but with the same objective, the "JuanSoñador" Foundation, also from "BoscoSocial", carries out the "Malaikas" project. Aimed at women between 19 and 75 at risk of social exclusion, in a situation of vulnerability and of different nationalities, the program is developed in Coruña, Ourense, Lugo and Vigo. In 2019, more than 650 women from over 45 nationalities participated. "Malaikas" tries to break the isolation of migrant women, provides meeting spaces, creates circles, networks and alliances, which encourage the empowerment of women to face their life plans within the migration process.

In Bilbao, "shared accommodation." In Bilbao, the "Boscos" Foundation has launched the project called "Zuen Etxean", which offers refuge and accompaniment in social inclusion to young people in situations of vulnerability through coexistence in shared housing with a Salesian community. "For these young people - says a Salesian who shares his life with them - this time with us is like an oasis in which they can take their life and decisions more calmly, and continue to fight for that dream which, for various reasons, they could not fulfill in their places of origin or that they did not see as feasible while they were there, and that now, from afar and after other experiences, some see that they can indeed face it, even in another way."

"BoscoSocial" projects include youth assistance programs and all have an impact, in one way or another, on the growth of social justice. Over 14,000 people, preferably children, adolescents and young people at risk of social exclusion, and almost 1,400 families are assisted thanks to the work of over 400 educators and contract workers and more than 230 volunteers.