Italy – CG28, official opening: "A strong time of meeting, of prayer and of discernment" 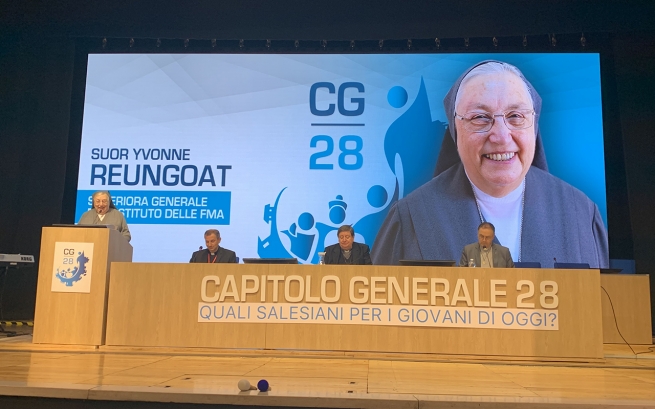 (ANS - Turin) - Don Bosco is certainly happy and rejoices at hearing the expressions uttered on the official opening morning of General Chapter 28.

Several times, in the greetings, those who took the floor or sent a message referred to the origins and to Valdocco.

Turin's Mayor, Ms Appendino, recalls that "seed that, in just over two centuries of history, has left indelible marks and contributed to strongly connote the character of our city." And today that character is still present in the city of Turin: "like the activities of the Salesian congregation, it's reflected in the continuous commitment to educate young people, to teach to be supportive and attentive to the weakest, to welcome without prejudice those who leave their own country of origin and dreams of building a new life for themselves."

Monsignor Nosiglia, Bishop of Turin, highlights the current relevance of Don Bosco's educational experience: "from the wealth of experience that Don Bosco has left us, we can today also draw several fundamental features of each educational action: the authoritativeness of the educator, the centrality of the personal relationship, education as an act of love ('a matter of the heart,' as Don Bosco would say), the integral formation of the person, co-responsibility for the construction of the common good."

With a gaze to the Salesian Family, Mother Yvonne Reungoat, Superior General of the Daughters of Mary Help of Christians, highlighted the opportunity and necessity of each Chapter Assembly in the world horizon (the FMA are also preparing to celebrate their General Chapter): "They are precious opportunities to revive today the apostolic and missionary passion that nourished the beginnings of the Salesian Family and that we try to keep alive today."

Thanks and best wishes also on behalf of all the laity of the Salesian Family were expressed by Renato Valeria, President of the "primary" ADMA of Turin who thanked participants for their presence and offered his best wishes for "a strong [intense] time of meeting, of prayer and of discernment."

Cardinal João Braz de Aviz offered his message to speak of an ecclesial horizon open to the present moment. It is in this context that a renewed document dealing with the relationships of consecrated life in the Church (mutuae relationes) is now at the final stages. He continued with the presentation of some current challenges for consecrated life.

First of all, he mentioned, those involving formation choices. Then he underlined the attention that must be paid to give a just and renewed importance to man-woman reciprocity. Another open challenge is that which concerns the service of authority. Last but not least, is the challenge that awaits the management of ecclesiastical assets dependent on institutes of consecrated life.