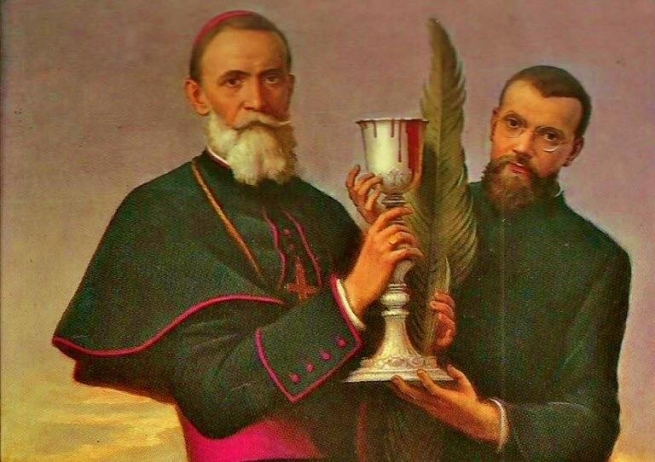 (ANS - Rome) - In one of his dreams Don Bosco had seen two large chalices rise to Heaven, calices with which his children would water the Salesian mission in the East: one was full of sweat and the other of blood. After a few decades, Fr Luigi Versiglia from China would have written to another Salesian who had given him a chalice: “May the Lord ensure that I return the chalice that has been offered to our Pious Society. May it overflow, if not with my blood, at least my sweat!"

Luigi Versiglia was born in Oliva Gessi (Pavia) on June 5, 1873. At the age of twelve, he entered the oratory of Valdocco where he met Don Bosco. Ordained priest (1895), after being Director and master of novices in Genzano di Roma, he led the first Salesian missionary expedition to China in 1906. In 1918, the Salesians received the mission of Shiu Chow from the Apostolic Vicar of Canton. Fr Luigi Versiglia was appointed Apostolic Vicar and on 9 January, 1921, he was consecrated Bishop. He was a true shepherd, entirely devoted to his flock. He gave the Vicariate a solid structure with a seminary, houses of formation, himself designing various residences and shelters for the elderly and needy. He looked after the formation of the catechists with true conviction.

Callisto Caravario was born in Cuorgné (Turin) on June 8, 1903, and was a student at the Valdocco oratory. In 1924, still a cleric, he left for China as a missionary. He was sent to Macau, and then for two years on the island of Timor, edifying everyone with all his goodness and his apostolic zeal. On May 18, 1929, Msgr. Versiglia ordained him a priest.

On February 25, 1930, the two missionaries were travelling by boat for a pastoral visit when a gang of Bolshevik pirates intercepted them. The Communists climbed on board and, finding three young catechists, wanted to take them away with them. The two missionaries interposed and were attacked and tied, while the pirates ransacked their possessions. One of the bandits, snatching the crucifixes from a catechist, shouted: “Why do you love these crosses? We hate them with all our souls!" The young women were able to see the missionaries confess to each other in a low voice before being shot in a forest. Thus the two chalices dreamed by Don Bosco were raised to Heaven!

Because of this anniversary, the Provincial of the “Mary Help of Christians” Province based in Hong Kong is promoting a series of events from February 25 to November 13, and issued a message in which he said: “I hope that through the various activities that we are organizing this year we will know how to learn the spirit of martyrdom from these two Saints ... Every Christian participates in the 'white martyrdom' if he puts the Gospel into practice and carries his own cross. Let's model ourselves on the example of Saints Luigi Versiglia and Callisto Caravario!”