Italy – A model for Italy and Europe: VTC of Borgo Ragazzi Don Bosco 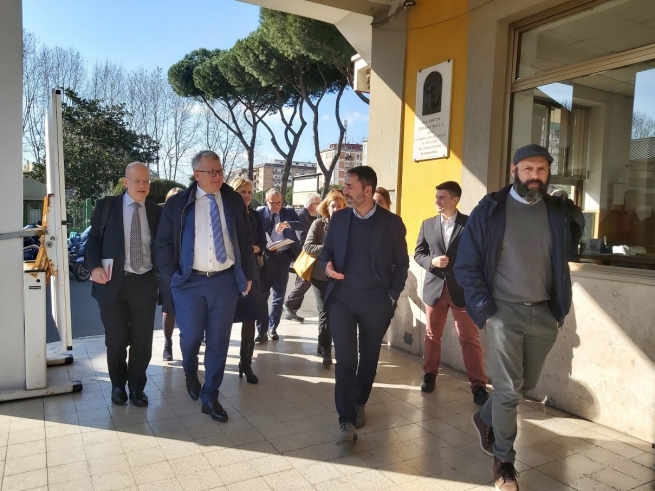 (ANS - Rome) - "Yesterday I visited an institution here in Rome, Borgo Ragazzi Don Bosco, and I was amazed by what Vocational Training they offer! They told me that after six months, 90% of their students have a job, a contract - and not the ones of just a few months; sometimes they are indeterminate. This is the right way to proceed: Promote Education and Vocational Training!" Thus stated the European Commissioner for Labor and Social Rights, the Hon. Nicolas Schmit, speaking to the “Labor and EU Policies” Commissions of the Italian Parliament and Senate.

The report of the European Commissioner was only one step in a wider path. In Italy for a series of official appointments with the Italian authorities, the Commissioner asked the officials of the Lazio Region to be able to visit a center of excellence for testing the Dual System for apprenticeships. The Lazio Region proposed he visit the Borgo Don Bosco Vocational Training Center.

The visit took place on Monday 24 February. Accompanying the Commissioner were several officials from the Lazio Region, in addition to the Councilor for Social Policies of the Lazio Region, Claudio Di Berardino; to receive the guests on behalf of the Salesians was the director of CNOS-FAP Lazio, Fabrizio Tosti; Fr Mario Tonini SDB, National Administrative Director of CNOS-FAP; and Renato Cursi, Executive Secretary of "Don Bosco International" (DBI).

Following a visit, dr. Di Berardino also spent words of great praise towards the Salesian VTC: "This afternoon I visited the national center of Salesian Works in Don Bosco for ongoing formation together with the Commissioner for Labour of the European Commission Nicolas Schmit. As a region we have been able to proudly show the training courses that hundreds of students do every year. The training offered in this center has the enormous advantage of preparing young people to enter the world of work with professional skills that can be immediately spent, without neglecting preparations of basic general knowledge."

"These paths are 'incubators of social inclusion' in which the risk of dispersion is answered with concrete opportunities for growth and insertion in society and in work," he continued.

"The mechanics, home automation and catering workshops were esepcially appreciated, which are only an example of a variety of professional profiles that are created with dual learning methods in companies in the sector, and which represent paths with a high percentage of entry into the labour market. The courses are planned and managed by the Lazio Region and financed with EU (European Social Fund), national and regional funds," the Councilor concluded.