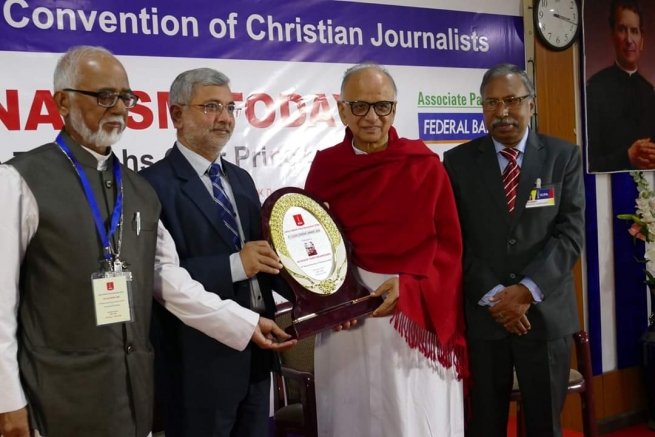 Addressing the gathering after receiving the award, Archbishop Emeritus Menamparampil spoke about the importance of dissent, its legitimacy and its need for the emergence of common wisdom. He also urged the members of the audience to engage in intelligent dialogue for the truth to emerge eventually. The Salesian Archbishop Thomas believes in social activism and is a firm believer of peace-building and social harmony who often repeats, “Peace comes when all of us recognize that we need each other.”

This award is given for his relentless peace-activism and his bold writing against Communalism and fundamentalism gaining ground globally. Archbishop Menamparampil’s name is synonymous with peace, inter-community dialogue and social harmony. His incisive, though-provoking writing on these subjects are noted for their lucidity, clarity, relevance and authenticity. His razor-sharp analyses of social-cultural and political issues, especially relating to North-East have lead to soul-searching debates and concrete peace-initiatives, for which he was nominated for the Nobel Peace Prize in 2011. The Father Louis Careno Award is instituted by the (ICPA) with the support of the Salesian Province of Mumbai in fond memory of Fr Louis Careno, a Salesian missionary who worked in Indian for several years, himself a renowned writer.

ICPA President Ignatius Gonsalves delivered the presidential address and set the tone by highlighting that the context clarifies and magnifies the content, and that journalists today are precariously placed to speak the truth. The welcome address was rendered by Fr Suresh Mathew, ICPA secretary and chief editor of Indian Currents weekly magazine, who in his speech quoted famed newspaper publisher Mr Ramnath Goenka and said criticism from the government should be a badge of honour for journalists. The session began with the attendees reciting the Preamble of the Constitution of India.

Archbishop Anil Couto of Delhi bemoaned the sorry state of media in the country. “Most of the news channels have become cheerleaders of the ruling party and they have given up the pretense of being custodian of truth. India has dropped to 140 out of 180 countries in the World Press Freedom Index in 2019. The media must reflect reality,” he said. “As a Christian journalist, you have a sacred duty to raise your voice against evils in the society and in the Church.”

Rohit Wellington Rajan, senior news editor and anchor of New Delhi Television (NDTV), a panel member, agreed that everyone now lives with fear and resentment. “In our conversations, there is little acceptance of the other point of view and certainly very little nuance,” he explained. Rajan regrets that journalism, especially television, now serves viewers on opinion. “What is largely missing are the facts. That is the first challenge we face,” he added. Rajan noted, “the collapse of empathy in journalism” that has become “highly elite, much distanced from the ordinary people’s experience. He noted that we need to be voice to the voiceless people and promote truth and justice. Opinion is cheap; facts are sacred. In this age of fake news and half-truths, the media needs to a flag-bearer of facts and portray the truth.”

The ICPA honoured 25 journalists from around the country for their courageous and unbiased journalism over the many years.

Fr Santosh Kumar Digal received the ICPA’s award for the Best Reportage on Scheduled Castes and Scheduled Tribes for consistently being the voice of people’s rights, especially the tribals who are susceptible to exploitation and injustice. Fr John Deepak Sulya received the ICPA’s Swami Devanand Chakkungal Award for the Best Hindi Writer for his significant contributions to Hindi literature.