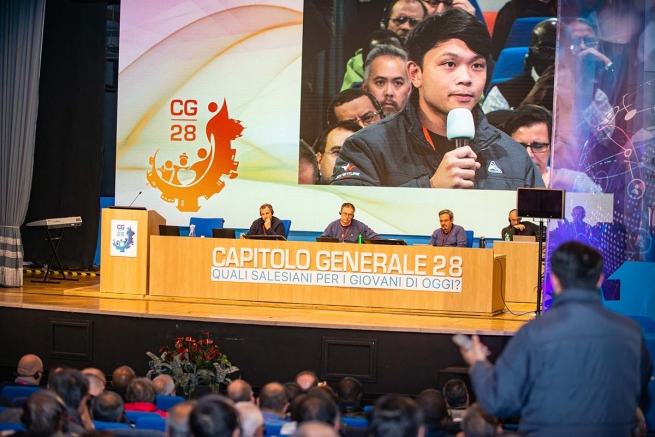 (ANS - Turin) - Tuesday 3 March was the day of the first harvest of results. Indeed, the day began with the sharing of the work done by the 4 commissions on the first group: "priority of the Salesian mission with the young." The approach followed was that proposed by the Instrumentum Laboris, inspired by the synodal journey: recognizing, interpreting, choosing.

The sharing between religious of many “youth-filled” and Salesian contexts has been rich and sincere in highlighting strengths, limitations and weaknesses. It is possible to tune in to what emerged by listening to some of the expressions echoed in the classroom by those who presented the work of the commissions.

“Young people are our prophets and their life, both in their efforts and their potential, is prophecy for us. We Salesians, with suffering, acknowledge that we do not always know and live in the world of young people and that there is an emotional and effective distance between us and them. They ask us for 'time' and we just give 'space'.

The revolution is to return to first love, to be a Congregation of the poor for the poor: this asks us to rethink our way of life, our religious life, simpler, palpably fraternal and poorer, especially where the works occupy the most space of the Work which is the Charism.

Loving-kindness as the DNA of the Salesian who knows how to live the pedagogy of tenderness: rehabilitating the affective as a key element in the alliance between adult and young person. 'People will not remember what you said or what you did, but how you made them feel.' (Maya Angelou).

We believe that the most suitable context for the Preventive System is the family.”

The contributions which, however, shook and animated each Chapter member are those that came from the young. Each of them intervened in the classroom, expressing the joy of being able to speak "to my father, in my home."

They frankly asked the Salesians to be simply - and in all - Don Bosco among them, without fears and without waiting for the young people to adapt to the hours of the religious and to the pre-packaged standard answers and structures prepared without them. They are not looking for companions from above, but for the "Don Bosco's of today", ready to walk by their side and to build tomorrow with them, as happened to those first young people who in Turin, with Don Bosco, gave life to the Congregation.

Among the most closely felt requests were: more openness to the gift that women are in the Church and in the Salesian Family; ecology not as an extra task among others, but as the only future for everyone and especially for young people; being with the young and on the side of the young, starting with those among them who are oriented towards Salesian life: "Please do not make them quickly become old and distant as soon as they enter your houses of formation!"

In the afternoon, the work of the Commissions on the second group resumed: "Profile of the Salesian today".