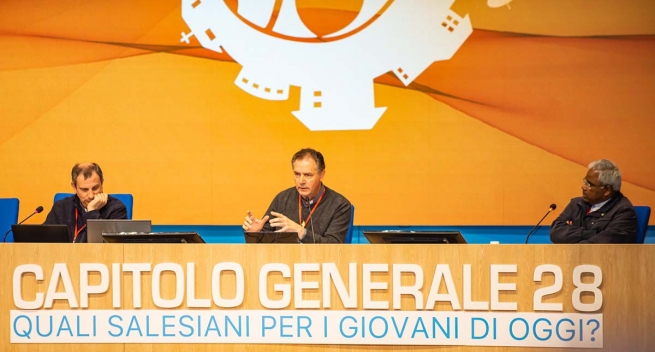 (ANS - Turin) - The morning of Wednesday 4 March was spent in the Assembly and in the afternoon in the Commissions, where work began on the second nucleus of the Chapter's theme: the profile of the Salesian today.

Fr Jose Kuruvachira, Provincial of Dimapur, yesterday's moderator, led the assembly in the two morning sessions, entirely dedicated to the 15 proposals that the juridical commission had presented to Chapter members on the afternoon of Monday 2 March.

There were numerous classroom presentations, and those who for reasons of time failed to express themselves in public had the opportunity to send their contributions in writing. This gives an idea of ​​how intense the participation has been.

Among the issues examined, on which many expressed themselves, special attention was drawn to Social Communication at the cenral level in forthcoming years, with different opinions on the most suitable way to give the right weight and increase its effectiveness to the animation of this area, considered by all to be increasingly fundamental for the Salesian mission with young people, who are - in all continents - one with the digital world, their constant habitat.

Similarly, many interventions focused on how the Congregation's center relates to the Salesian Family and animates and forms the Salesians so that they are enabled, capable of belonging to it, according to what the Constitutions require (art. 5), with some calling for proposals more oriented to establishing a specific Department and others, instead, to continue the experience already underway of the Secretariat, adding new elements for greater effectiveness in animation.

A third area that attracted a lot of attention concerned a series of proposals concerning the mandates of the members of the General Council, in particular the sector and regional councilors, as well as the modalities to be followed for the elections of the Rector Major, his Vicar and other Council members. The opinions that emerged and were offered to the Juridical Commission - in response to what the commission itself had already elaborated, after taking into account all the contributions of the Provincial Chapters, of the General Council and of the individual religious - showed that for some, a maximum service of two mandates allows one to offer the best of oneself and, then, also give others the opportunity to do the same; while for others, it is important not to preclude the freedom of choice of the chapter assembly, delimiting it excessively with times, terms or conditions.

Overall, the diversity of opinions has brought out the wealth of experiences and sensitivities that concentrate us in an event such as the General Chapter. One also perceives how, day after day, the assembly, as if it were a single body, becomes more and more aware of the great responsibility entrusted to it and in various ways it increasingly takes charge as the main protagonist of the GC28 journey.