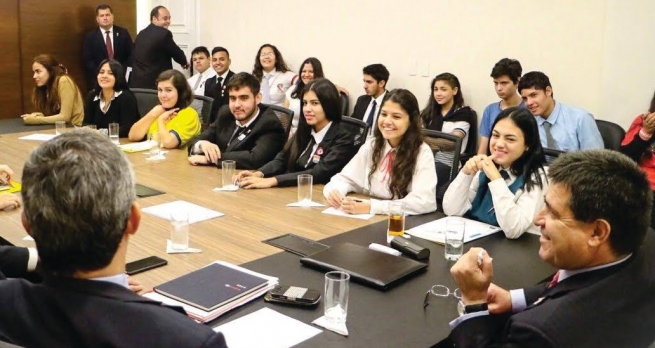 (ANS - Asunción) - According to research "Latin America and the Caribbean are facing a slowdown in economic growth that could scupper all the progress made over the past decade, such as the reduction of the poverty rate, progress on equality or, a key issue, the adoption of a quality education system." It is certain that the educational reality in Latin America has not changed much in recent years. The governments have not invested in education and this is why there is a malaise in educational policies and government budgets in the field. Paraguay is no exception. In recent weeks its educational situation has been around the world. The Minister of Education, Enrique Riera, has declared an educational emergency.

A few days ago the schools in the Network of Salesian Schools in Paraguay, an organization that brings together about twenty educational institutions in the country, have joined the general strike of the students “expressing solidarity and sharing the students' demands for quality education ". On the other hand, they have urged the government to launch a long-term National Education Plan and a Plan of Social Action "which addresses the situations of greater vulnerability and poverty."

In view of these decisions, the President of the Republic, Hon. Horacio Cartes, met with student representatives, with whom he signed a document establishing the points agreed to improve the quality of education in the country. When the document was signed the protests and occupation of schools ended.

Worthy of mention is the presence of a student from the "Salesianito" Institute in Salma Aguero, in the group of independent students who met with the President at the Presidential Palace. The meeting came after the students' organizations of high school (Fenae, Unepy and ONE) and independent students were unable to agree with the new Minister of Education, Enrique Riera, after four hours of talks at the headquarters of the Ministry of Education and Culture.

One of their demands is for the government to declare a "national educational emergency" regarding the infrastructure of schools across the country, which are in critical condition. This educational emergency will impose an accelerated development in solving the problem.

"The happiness of nations depends on the sound education of young people," Don Bosco used to say. And this is a reality that governments have forgotten. Don Bosco's message is as true today as it was 200 years ago.