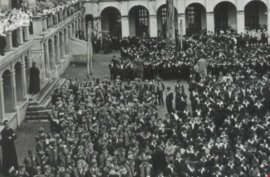 Quito, Ecuador - 1955 - An image at the Salesian historical archives of Ecuador, bears testimony to the devotion of the faithful to St. Dominic Savio. In the photograph, taken in the city of Quito, one can in fact see a large group of people participating in the Mass in honor of Dominic Savio, who a year earlier, in 1954, had been canonized by Pope Pius XII. 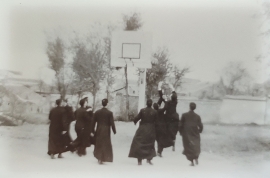 Spain - Salesians of Carabanchel Theologate at a basketball match

Carabanchel, Spain - In this old photograph, dating from the mid-20th century, you can see some Salesians of the Carabanchel Theologate playing a basketball game in the courtyard. The Salesian presence in Carabanchel was, from the beginning, not only a school but also a training center for young Salesians. Here, in fact, on 3 October 1931, the Salesian Theologate for Spain was inaugurated, which continued to be in this house until 1961, when it was instead transferred to Salamanca. 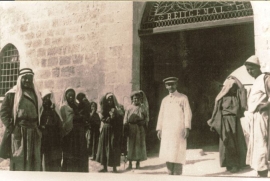 Simone Srugi in the medical clinic in Beit Jamal

Beit Jamal – An image of the Salesian Brother Sim'ān (Simon) Srugi, when he was in charge of the medical-nursing clinic attached to the Salesian house at Betgamāl. From the registers compiled by Bro. Srugi himself, it was possible to know the health service that was provided every day to dozens of sick people, coming from more than 70 villages, some even many kilometers away. The descendants of the patients that Srugi helped and treated still remember him as "The Holy Doctor of Betgamāl". 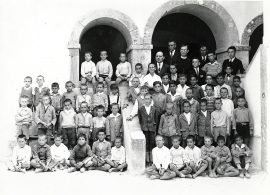 Portugal - Beginning of the 1932/33 school year in Estoril

Estoril, Portugal - 1932 - Salesians Fr José Joaquim Silva (Rector, in the back row) and Fr José da Silva Lucas (Novice Master), pose together with the pupils of the Primary School of the Salesians of Estoril on the day of the opening of the academic year 1932/1933.