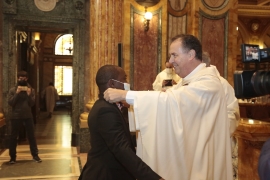 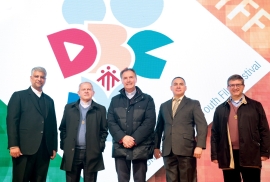 Turin, Italy - November 2021 - The closing ceremony of the "Don Bosco Global Youth Film Festival" took place on Friday 19 November at the Grand Theatre in Valdocco (Turin), during which the winners in the respective categories in the competition were announced. The event was presided by the Rector Major, Fr Ángel Fernández Artime, in the presence of the Councilor for Social Communication, Fr Gildasio Mendes, the Director of the Festival, Fr Harris Pakkam, the President of the "Italian Film Commission" and member of the Grand Jury, Cristina Priarone, and Alberto Rodriguez, President of the Don Bosco in the World Foundation. 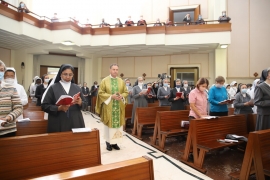 Rome, Italy - October 2021 - The 24th General Chapter of the Institute of the Daughters of Mary Help of Christians at the FMA Generalate in Rome ended yesterday, 24 October. In the morning, Mother General, Sr. Chiara Cazzuola, presented her concluding speech to the Chapter members, thanking them "for their passionate and serene participation". At 11am, the Rector Major of the Salesians, Fr. Ángel Fernández Artime, presided over the Eucharist. Before the conclusion of GC 24, the Chapter members also received a special visit on 22 October from Pope Francis who met the participants and exhorted them to be "generative communities" and "women of hope". The Holy Father lauded the ministry carried out by the FMA throughout the world, especially in the current multicultural and multireligious social context. 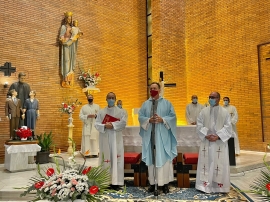 Spain - October 2021 - The Rector Major, Fr Ángel Fernández Artime, visited Spain from Friday 15 to Sunday 17 October. On 15 October, the 10th Successor of Don Bosco had a meeting with the Salesian Family of the city of León and with the Salesians of the house of health in Santiago el Mayor. The following day, Saturday 16 October, the Rector Major inaugurated the Don Bosco Park and blessed a commemorative monument to commemorate the 50th anniversary of the Salesian presence in the city of Valladolid. On the same day, Fr Ángel Fernández Artime met the Archbishop of Valladolid, Cardinal Ricardo Blázquez. Fr Fernando García, Provincial of the "St James the Greater" Province, and Fr Rogelio Arenal, Rector of the house in Valladolid were also present. Finally, on the last day, the Rector Major celebrated the Eucharist for the 50th anniversary of Salesian presence in the parish of Mary Help of Christians.