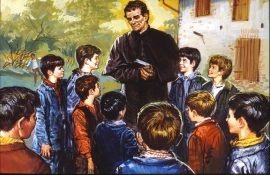 (ANS - São Paulo) - Don Bosco's vocational journey, as in all vocational paths, was not all easy, carefree or to be taken for granted. Doubts and difficulties were present in his maturation and decision-making process. Don Bosco also had doubts. He dreamed of becoming a Franciscan. He persistently wondered what his mission would be, where he should carry out his pastoral task. His life was marked by indecisions and uncertainty, but in the midst of his life he knew that there was a "medicine" that God sent him: it was Father Cafasso, his spiritual director.

For Don Bosco, the advice of Fr Giuseppe Cafasso to devote himself to the poor children and young people of Turin represented God's answer to his doubts; and from there he set out in search of his "beloved young people". We know he went out to look for them in the city squares, in the streets, workshops, out in the fields, taverns, bars, and barber shops ... He looked for them wherever they were, where they hung out, where they worked, where they lived, and in many cases where they just barely managed to survive.

Certainly Don Bosco knew how to "fish" with great kindness: he asked each of them about their family, their work, their parish, their sacramental life. He entertained them with stories and jokes, gave them some small gifts and invited them to the Sunday oratory. Don Bosco captured his young people with his empathy, his company, and above all with his presence in the important moments of their lives.

In chapters 4 and 5 of the third volume of his Biographical Memoirs, we find many facts about how he "fished out" young people to make them participate in the Oratory. Father Garigliano, his friend from the seminary, narrates an episode:

"One day I was accompanying Don Bosco through the streets of Turin, when in front of the Trinity church we met a young man with a perverse and arrogant appearance. To which Don Bosco gently said: “Who are you? I'm a father who loves young people and on Sunday I gather them in a nice place." The young man replied: "I'm a poor unemployed young man, fatherless and motherless, and I am looking for work." Don Bosco's final proposal was: "On Sunday I shall be waiting for you at the Oratory. Come, you will have fun, and then I will look for a job for you." Don Bosco took a coin from his pocket and placed it in the young man's hands. The young man, moved, looked at the coin and replied: “Don Bosco! I will come to the oratory!" In fact, the young man came to the Oratory and remained with Don Bosco."

Today the Salesian Family continues the work started by Don Bosco. The world has changed, but poor young people continue to be in city squares, bars, on the streets, and also in the new areopagus: the digital courtyards.

For this reason, the Salesian Family must again ask itself: does the "Oratorian heart" still beat in us and in our works? How do we approach today's youth?