Italy – 110 years ago, the death of Don Rua. And soon an unpublished document
Featured 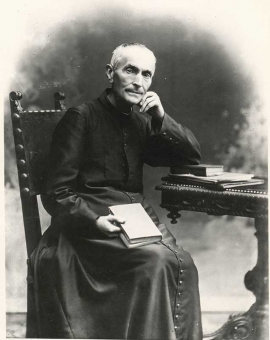 (ANS - Rome) - Everything had been made ready for the great celebration of the golden Mass of Don Michele Rua on June 24, 1910, but the Lord called Don Rua to Him three months earlier, on April 6, at the age of 72. He had spent half of it beside Don Bosco and 22 as his successor. They had shared everything: bread, work, labors, anxieties, joys and sorrows, disappointments and hopes, until his death. Same passion for young people, zeal for souls, love for the sacramented Jesus, for the Help of Christians, for the sacraments, for the Pope, same readiness for hard work and sacrifice, same capacity for mortification, same arduous journeys, accompanied by graces and miracles. They shared the aspiration to holiness, achieved by both with the canonization of one (1934) and the beatification of the other (1972).

The intuitions of the charismatic founder in Fr Rua have become reality, institution, organization, structure. Throughout his Rectorate, also marked by much suffering, he consolidated and developed the Salesian Work, which he feared might not survive the founder; he provided for an intelligent decentralization of its government; he relaunched and enriched the oratories and the association of Cooperators.

Fr Rua placed the Salesian society on unprecedented ways towards assisting lepers, the sick, the disabled; the Salesian faced the unprecedented challenge of the "worker question"; developed the inherited educational and spiritual heritage with skilled collaborators; he had educators prepared for the heightened situation with higher studies; he expanded missionary spaces; delineated the social dimension of the Salesian house in ways appropriate to the times.

All this can be found in the volumes that collect the Proceedings of two Conferences promoted on the occasion of the hundred years since his death by the Salesian Historical Institute (ISS) and the Association of Cultori di Storia Salesiana (ACSSA).

His funeral was no less solemn and participatory than Don Bosco's. On 6-7 April 1910, the city of Turin stopped, from the City Council to the workers of the FIAT plants: an immense crowd (many tens of thousands of people), including many authorities - first of all Princess Maria Laetitia – who rushed to pay their respects, while heartfelt condolences came from all over the world.

Ready for broadcast on April 4, at the scheduled closure of the 28th General Chapter, was a remarkable video, lasting several minutes, highlighted the most salient moments of the two days of Don Rua's funeral; alas, Covid-19 struck and everything came to a halt.

It is a true and proper documentary with cinematographic sequences shot from various angles inside Valdocco, in Piazza Maria Ausiliatrice, in via Cottolengo ... Moving images of Don Rinaldi, Don Barberis, Don Lemoyne ... Known faces, with close-ups; with them, the crowd of people. The Turin world of the time offered to us by a camera rented for the extraordinary funeral celebration by the farsighted Salesians of the time, with cinematography still very much in its early stage.

Once the coronavirus is over, we hope to show it to you. Stand by.