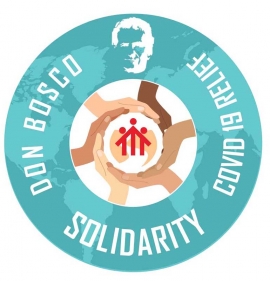 (ANS – Rome) – There is widespread admiration for the massive scale at which the Salesian Family has responded so promptly to help the communities affected by Covid-19. Salesian Family members have helped them to deal with the negative consequences of the lockdown that is in place today in almost all countries of the world. But there is another side to the story that often goes un-noticed. It is at times taken for granted that Salesians have a massive stockpile of resources that are available, at the snap of a finger, to aid people in need. Nothing could be further from the reality.

“Once upon a time” – Fr George Menamparampil, the Congregation's Emergency Response Coordinator, starts to explain – “Salesians who left their own motherland to go as volunteers to serve in less developed countries, kept in contact with their members of their own extended family. They also wrote to the people of their parish back home, their former classmates, people in their own village and the district around them and their personal friends. These ‘missionaries’ informed their friends of what they were doing in their adopted countries and the needs of the local people. Many people of goodwill responded with small donations. Though the amount each ‘benefactor’ gave was small, the number of such donors was large; hence, these Salesians offered a lot of charitable services in their communities.”

Later, various Salesian Provinces in the more developed world started official fundraising offices. These were more professional in their work and better structured. The use of these funds in the less developed countries became also better organized and transparent.

“In more recent times” – Fr Menamparampil adds – “the Congregation has been promoting the idea of a greater self-sustainability of each of its 90 Provinces around the world. It has worked proactively to build the capacities of the staff of its Provincial Planning and Development Office in every Province. They worked in various fields – improvement of the administration of the Province and the individual institutions, creativity and innovation in reducing costs and a better use of the resources they already have, accessing public funds, building partnerships with local companies and multinational corporations, inviting collaborators in their own country to offer their expertise, cash or goods, etc. In fact, at the conference of such fundraising offices held at Rome in January 2019, there were 89 participants from 54 Provinces in 45 countries.”

At the outbreak of this Covid-19 pandemic, all these efforts are bearing fruits. The partnerships we have built with government structures, private corporations, clubs and other community-based organizations and the collaboration of numerous individuals have made it possible for the Salesian Family to respond immediately to the emergent needs of the most vulnerable people in the neighborhood of Salesian institutions.

In numerous countries, the Government itself, impressed by our organizational structure and the depth of our commitment, have asked us to use their resources to reach them to the most vulnerable people. There are corporations, clubs, other CSO’s, dioceses and religious congregations that are donating to this work of Don Bosco. Seeing the transparency of our financial management and the effective targeting of our resources, numerous individuals make their own small or large donations.

Fr Menamparampil finally states: “There is an army from the Salesian Family at the forefront of this war against the negative consequences of Covid-19. There is an almost equally large army in the background, supporting our frontline warriors helping them fill the gaps in the resources they receive locally from their own partners and donors. We actually are looking to expand both of our armies – those at the frontlines and those in the supply lines.”

IF YOU WISH TO BE A PART OF THIS, CONTACT THE SALESIAN / DON BOSCO INSTITUTION CLOSEST TO YOU IN YOUR COUNTRY, or, write to : This email address is being protected from spambots. You need JavaScript enabled to view it.