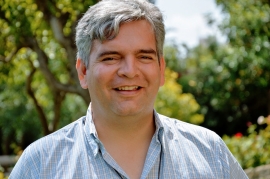 (ANS - Cremisan) - In the Mediterranean Region that the Salesians decided to establish in 2014, and which includes the Provinces of Italy, Spain, Portugal and the Middle East (MOR), the latter is assuming a growing centrality in the strategies of the Congregation, so much so that the others are active in helping it in the growth and strengthening of its activities. For example, four young missionaries were made available to the Provincial last year to give more vigor to the Salesian activities planned in the Province countries: Israel, Palestine, Syria, Egypt and Lebanon.

Among the first initiatives there was that of moving the headquarters of the Province from Bethlehem to Cremisan, thus allowing to expand the capacity of the local school: “In Bethlehem,” explains the Provincial, Fr Alejandro José León Mendoza, 40 years old, of Venezuelan origins, in office since September 2018, “we could only host 180 students, but with our move, we'll have the space to offer formation to 90 more students.”

On the Province's roadmap, the first step was to establish the general and programmatic guidelines for each community, always with a gaze to the future of schools and oratories. “The goal,” continues Fr León, “is to work a lot on the laity who have roles of responsibility, to grow in transparency and self-sustainability, to improve the communication system inside and outside the congregation. At the first point is human resources, whether they are Salesian, local or missionary consecrated persons, one must be careful in the choice, accompaniment and formation, or lay people at the local level, being careful how to integrate those who decide to come here as a volunteer from all over the world.”

“Obviously in every work, there are specific needs, to which to give adequate and different answers,” concludes Fr León, “always keeping a general overview in our proposals. We have oratories and schools that are 100% Muslim; in others, mixed situations; in others still, an exclusive offer for Christians.”

Also, to meet these needs, in the MOR Province there is a significant generational change, which together with Fr León also concerns Fr Pietro Bianchi, who has just turned 50 and who holds the role of Provincial Economer and in-charge of schools, as well as coordinating the activities of the Cremisan winery.

Cremisan, in fact, located on the border between the West Bank and Jerusalem, a few kilometers from Bethlehem, is internationally known for its production of quality wines. Until 2004, the local house had hosted an International Theological Studentate with an emphasis on biblical archeology and interreligious dialogue addressed to 40 students every year, with ten teachers. Its activity was then transferred to the Ratisbonne monastery in Jerusalem.