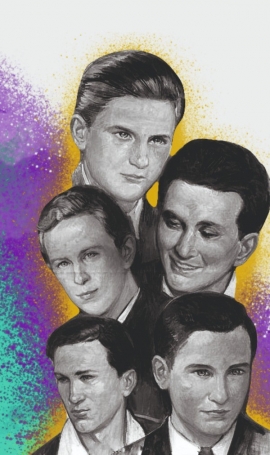 (ANS - Buenos Aires) - This is a nice reflection on the vivid memory of the five young Oratorians of Poznan, Poland, and on the celebration of the Sacred Heart of Jesus. Remembering in this technological time is something difficult, given that Google already has subtracted us this ability to remember. On the other hand, the work of remembrance urges us to recover the Salesian youthful spirituality of five young people who lived following Jesus fully.

Yes, to follow Jesus and live Salesian spirituality in one of the darkest and bloodiest episodes of the last century, World War II. These young martyrs are: Czeslaw Józwiak, Edward Kazmierski and Jarogniew Wojciechowski, all three were born in Poland. Franciszek Kesy and Edward Klinik lived in Berlin and Bochum, Germany.

They have common characteristics. The five were oratorians, engaged in the animation of their companions, consciously involved in their own human and Christian growth, united together by personal and social interests and projects.

They were filed and arrested by the Gestapo almost simultaneously in 1940. Together they lived the same prison trial and suffered martyrdom by guillotine on 24 August1942 in Dresden.

The friendship they formed during their imprisonment remained alive until the last moment. "He was one of the animators of the oratory and was closely united by bonds of friendship and desire for high Christian ideals like the other four", it can be said of each of them.

United in prison and in death, each of them has a particular biography. The five young men came from Christian families. On this basis, moreover, the life and evangelizing proposal of the oratory stimulated generosity towards the Lord, human maturity, prayer and apostolic commitment. They were open to life and yet always prepared, with a heart that revealed their generosity, in giving their very existence to following Jesus.

And I would like to recall the last personal and community attitude of these five young people, which highlights in a very evident way that revelatory heart that overflowed with joy, commitment, generosity and dedication.

But in this period we have witnessed the other side of our heart, which masks itself so as not to show our weaknesses or our shadows: fears, anger, meanness, selfishness and bad behavior.

In recalling the five martyrs, we point out the heroism of these young people who got involved for Jesus and offered their lives. They were not petty or self-centered, but honest in their beliefs and love for their fellow prisoners, for discovering that Jesus lives in them.

In memory of these young and close to the Feast Day of the Sacred Heart, we ask for the courage to live our daily life trying to integrate and embrace in us and in our hearts: what is bright and what is dark, that which reveals and that which covers, the generous and the petty.