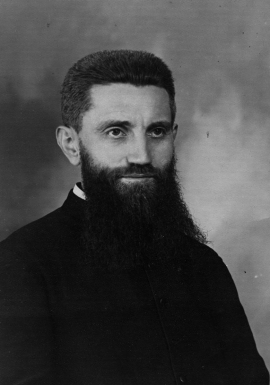 (ANS - Rome) - For Fr Costantino Vendrame, a missionary with the strength of faith and the persuasive sweetness of charity, the Sacred Heart was everything: and he propagated his devotion, joining that to Mary. So on October 14, 1924, while waiting to embark for India, he wrote on the back of a picture: "Sacred Heart of Jesus, I have entrusted everything in you, I have hoped for everything and I have not been confused."

Shortly afterwards, now on the ship, he meditates and inspires meditation "Meeting the King of Love", a work focused on the "too great love" with which He has loved us: "Everything is here: all the Gospel, all the Law. I loved you [...]", "I loved you more than my life, because I gave my life for you - and when one has given one's life, one has given his all." This was Fr Vendrame's preparation for his arrival in India: to look at the love of Jesus, to imitate Him. He will succeed fully.

From that moment, Fr Vendrame will be, for thousands of people, "Jesus passing by": not a preacher, but one in whom the Word became flesh, a book to read to understand who Christ is.

“We remember Father Vendrame as a priest who loved us with the heart of Christ, warm and human, strong and faithful, and ready to lay down his life for us. No sacrifices were too much for him in his work as a Pastor of souls,” testified one missionary.

“Father Costantino - we find it written - like Don Bosco did not belong to himself; he belonged to everyone and everyone had the right to take advantage of him, to 'eat' him, the Curé of Ars appears to have said.”

The Servant of God Msgr. Oreste Marengo certifies in his regard: “For me he was a Salesian who like Don Bosco always thought, spoke and judged in terms of souls to be saved, one who never thought of himself. […] Only from the Sacred Heart of Jesus did he draw his thirst for souls. His austerity was only overcome by his compassion for the poor.”

In the 1930s, Fr Vendrame decided to dedicate the church he wanted to be built in Mawlai to the Sacred Heart. With that sanctuary, Mawlai became the center of irradiation of the Sacred Heart throughout the area: but Fr Costantino was primarily interested in the living stones, souls who allowed themselves to be "reigned" by Jesus.

Now sick, while being transported to the hospital, he said: “It was worth suffering to see so many triumphs of grace!”

Fr Vendrame lived fatigue, hunger, thirst, solitude, sometimes contempt and rejection. But life had passed for others from his life. It was the mystery of the Sacred Heart, from which he had inspired the whole mission: of Jesus the Body given and the Blood shed, which he received, gave and adored, praying in the nights, finally alone before the Tabernacle.