Argentina – De Agostini, the priest who climbed in his cassock and discovered Patagonia's most remote places
Featured 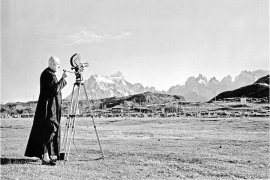 (ANS - Buenos Aires) - Photographer, cartographer and tireless explorer, the Salesian Fr Alberto De Agostini landed in Punta Arenas, in the Chilean Patagonia, in 1910. He settled in that region and for almost fifty years he explored the southern territories of Chile and Argentina. A staunch defender of Indigenous peoples, he was the first cartographer of that land and left a legacy printed in travel guides, chronicles and impressive photographs.

Alberto Maria De Agostini was born on 2 November 1883 in Pollone, a small village in Piedmont, in northern Italy, at the foot of the Alps, surrounded by a natural mountain environment that will mark him for the rest of his days. He was born into a family of cartographers, who had already published and sold books. Thanks to this tradition, he began to perceive his vocation for research, fueled by an infinite curiosity and by his passion for photography.

He was fascinated by Don Bosco and in 1909 he was ordained a priest among his Salesians. This is why, sent to the Salesian Missions, a year later, at the age of 26, he reached Punta Arenas, the southernmost city in Chilean Patagonia. There his love for the mountains grew further, as well as his skills as a climber and photographer.

He spent 50 years in southern South America, climbing mountains and dedicating himself to mapping southern Patagonia.

One of the most complex tasks of the mission, which he undertook together with other famous Salesians, such as Msgr. Giuseppe Fagnano, was to protect the indigenous communities of the region - the Yámanas, Onas, Selk'nam and Alacalufes - subjugated and enslaved by European landowners. Those who could not be enslaved were persecuted to death, displaced from their territories. Thus they were decimated, almost exterminated in atrocious hunts, or infected by the diseases brought by the colonists of Europe.

The missionaries of the Salesian Congregation tried to protect them by grouping them in missions, in the face of the fierce opposition of the white Europeans who saw the Indigenous as a handful of savages.

The Salesian explorer devoted a large part of his life to exploring the lands of Magellan. From the Darwin mountain range to the Balmaceda and Paine ranges, near Puerto Natales, places that dazzled him for their beauty. “The place is one of the wildest and most grandiose,” he wrote in his diaries. “The forests, lakes, rivers, waterfalls form the pedestal of this fantastic turreted castle, with gigantic walls, armored by glaciers, surmounted by terrifying-looking spires that offer so much seduction to the audacity of the climbers ...”.

Fr de Agostini, the explorer, the cartographer, the mountaineer, but above all the Salesian and missionary, died on Christmas day 1960 in the Mother House of the Salesians in Turin.