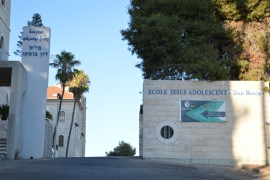 (ANS - Nazareth) - The Salesians of the Middle East Province are also present in Nazareth. After its foundation in 1896, and a series of historical vicissitudes, the more recent history of the Nazareth school, which offers education from elementary or primary school to vocational training school featuring specialized courses in carpentry, mechanics and electronics, first begins in 1950. Since then it has followed the various reforms of Israeli education, which in 2002 abolished vocational schools, and led to its transformation into a technological high school.

But what can the role of the school be to help the children of Nazareth in their growth path? Before the more strictly educational character of education, Fr Saggiotto starts from the human aspect: "The only 'hold' that can come from school is to get to know the children personally," he explains. "I used to go on the staircase every day and look the kids in the eye and greet them. Often they come from difficult situations or from family conflicts, and personal contact with them is essential to understand who is most in difficulty and to open a dialogue. We have cases of boys who have attempted suicide, or girls who are victims of violence, problems that can only be solved by closeness."

"Some of our past pupils attend the best Israeli universities, especially for Engineering and Technology-oriented specializations. But here we also work a lot on human values, on the relationships between Christians and Muslims and between Muslim Christians and Jews."

As for the oratory, it is open only to Christians, without distinction of rites, and hosts about 80 children over 14 for Friday afternoon activities and about 200 children on Saturday, animated by the older ones.

Abir Shajrawi is among the young people who attend the oratory. 24 years old, today a student of Medical Sciences in Jerusalem, at her last year of university with plans to continue her studies in medicine and to specialize abroad. "I'm an animator of the oratory especially with girls, in the time that I remain free from study," she explains. "This center is my second home. I've been coming here since I was very young. Today when I work with children I see them happy, and this makes me happy in turn."

Similar is the path of Yousef Noufi, 23, who attends the two-year course in Mechanical Engineering and helps his uncle in his carpentry business: "I take care of the activities of the youngest in sports," he says. "I'm committed to the oratory because when I was a child I received love, respect, dignity from the animators.  And today I feel compelled to do the same for the new generations."

Where divisions and fear generate suspicion, the Salesian smile still manages to work small miracles in the life of young people.