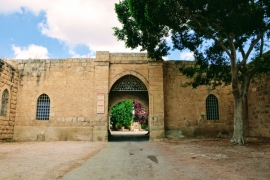 (ANS - Beitgemal) - Among the Salesian works in the Holy Land there is the house of Beitgemal. It was founded in 1878 by Fr Antonio Belloni as an orphanage and agricultural area, and is now directed by Fr Gian Maria Gianazza, in the Middle East since 1960. The dormant area is a community of nuns and one of friars, and houses the tomb of Saint Stephen and the Salesian coadjutor Simone Srugi, a central figure for the Salesians of the Middle East, who founded a dispensary here that offered medical assistance to the area's inhabitants.

Simone Srugi, today Venerable, was well-liked by everyone; even the bandits infesting the area who, if they didn't altogether love him, did at least admire and respect him. It is thus Simone Srugi who the Past Pupils of the work, years later, will remember as the holiest Salesian and the most influential educator. Among house's activities, the mill made available to farmers and their mediation for disputes concerning residents has also remained in the memory of the locals.

The Beitgemal area had been a swampy area for a long time, which the Salesians reclaimed over the years, making it cultivable.

Today Beitgemal is characterized by being a Church presence in a fully Jewish context, by welcoming numerous visitors, mainly Jews and immigrants from Eastern countries. These visitors are undoubtedly attracted by the beauty of the place, but they can also find the opportunity for an essential catechesis on Christianity and an interesting service for spreading the Word of God and other religious texts in various languages.

The house is also characterized by the reception of groups and, with the help of the Salesian NGO "VIS -  Volontariato Internazionale per lo Sviluppo - International Volunteers for Development" for the cultivation of the countryside with its vineyards and olive groves.

In recent years, the Salesian welcome house has organized numerous initiatives in Beitgemal, including cultural ones, such as concerts of classical music that are very popular with nearby residents, and gatherings of organized groups in the area, such as Scouts, during the summer.

Since 1920, a meteorological observatory has also been located in Beitgemal, which sends its weather reports every morning: before it did so for the British, today for Israel.