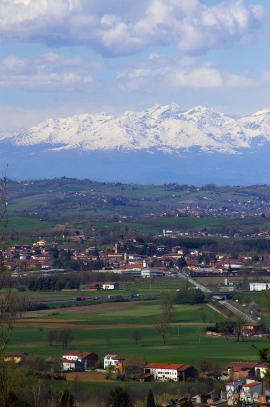 (ANS - Alessandria) - In Piedmont, between the hills of Monferrato Alessandrino and Casalese, there is a territory very closely linked to Don Bosco and Don Bosco felt very close: we can consider it among his privileged places.

During the famous autumn walks, the Saint passed through these villages several times with his cheerful brigade of boys. It was a passage that did good to the people, to the parish priests of the time and inspired many local children who decided to follow Don Bosco and enter his religious family. Almost 200 Salesians from these towns and about 300 the Daughters of Mary Help of Christians: an extraordinary Salesian harvest!

Don Bosco esteemed and appreciated the values ​​of these people, Monferrato and of peasant culture that was as reliable and trustworthy as his own: for this reason he opened several works there, the first in Piedmont, outside Turin: Mirabello, Borgo San Martino, Penango, Casale, Alessandria, Novi Ligurian and over thirty works by the Daughters of Mary Help of Christians. In short, a formidable heritage of people and educational presence.

An enormous reason for gratitude linked Don Bosco to the territory and to his diocese: his Salesian Society had received juridical recognition from the Bishop of Casale, Msgr. Pietro Maria Ferrè. As a canonically recognized Society, the Salesians were born in the Diocese of Casale, where the house of Mirabello was.

In 2020, some of these towns and villages are celebrating: they commemorate and celebrate important dates of their fellow Salesians who brought Don Bosco's charism and educational passion to the world, together with their Monferrato roots of reliability, creativity, industriousness, generosity, professional intelligence and ministry. A committee from these towns has developed a series of initiatives to rediscover the common cultural roots and Monferrato values that the sons of Don Bosco have brought to the world from their land. The virus has blocked various scheduled events, but they will be resumed later.

We like to point out these villages with a brief profile of the Salesians they celebrate: Occimiano and Fr Evasio Rabagliati, Rosignano Monferrato and Mons.Ernesto Coppo, St Salvatore Monferrato and Fr Giovanni Guarona, Lu and the Blessed Filippo Rinaldi, Mirabello and Fr Pietro Ricaldone.

While the latter two, having become Rectors Major, are already well known to the vast Salesian audience, the first three belong to the wide range of less famous, yet no less extraordinary Salesian figures. For this reason, in the coming weeks ANS intends to present the stories and apostolate of Fr Rebagliati, Msgr. Coppo and Fr Guarona, children of this blessed land and spiritual Sons of Don Bosco.

In the meantime, the committee of these towns wishes to invite those who love Don Bosco to visit their territory and learn about the roots of these great fellow countrymen of theirs: visitors will find family-style hospitality, cultural stimuli, the beauties of the hills, significant evidence of peasant life and creativity, and the opportunity to retrace the paths that Don Bosco and so many of his disciples have already walked.