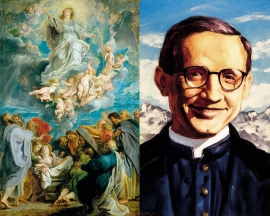 (ANS - Rome) - The venerable Fr Giuseppe Quadrio (1921-1963), who died at the beginning of the Second Vatican Council, for which he had offered his life, was an excellent theologian and a mystic, declared venerable by Pope Benedict XVI on December 19, 2009. His vocational story is a pure and continuous "yes" to Jesus, from infancy until death, at the age of 42 after a long and painful illness. The 10-year-old boy had already made a vow of perpetual virginity to Our Lady: “The vow to be yours alone and of Jesus forever.”

Conquered by the holiness of Don Bosco, he entered the novitiate at the age of 15, living all his adolescence and youth as an authentic falling in love with Jesus and Mary. With profound Christocentric and Marian spirituality, he lived the preparation and the priestly ministry, as well as the commitment to study and academic teaching.

During his years of study in Rome, his Jesuit professors chose him for a public dispute (December 12, 1946) at the Gregorian University about the definability of the dogma of the assumption of Mary, in the presence of important ecclesiastical and civil authorities, including nine cardinals and the future Pope Paul VI. It was an event that was a resounding success and made him become an authority in the sector.

Fr Quadrio wrote to Fr Pietro Ricaldone, then Rector Major, on the following 29 December: "The Holy Father [Pius XII] was kindly interested in the dispute and a few days ago he sent to ask for a copy of the opening speech and the answers to the difficulties."

Encouraged by the teachers, under the direction of Fr Carlo Boyer, he undertook a thesis in continuity with the dispute, the treatise "De Assumptione Beatae Mariae Virginis" by  Pseudo-Augustine and its influence in Latin theology on the Assumption, defended on 7 December 1949, in the imminence of the definition of the dogma which would take place on November 1, 1950, by Pius XII.

Fr Quadrio interprets the sense of the glorification of the Virgin as the complete fulfillment of docility at the guidance of the Spirit, for which Mary represents, even in her singularity, the sublime model of the soul constituted by God.

"Mary's death was the death of love: God's love became so intense and burning, that in the end, it loosened the bonds that kept that divine creature tied to earthly life. That most holy organism no longer held, but succumbed to the intensity of love "(Homilies, pp. 168-169).

With determination, Fr Quadrio explains the meaning of the dogma of the assumption: "There is eternal life. It is after death that life begins [...]. Dying is coming home, closing the door ajar and saying: 'My Father, I have arrived, here I am'". (Homilies, pp. 173-174).

The glorification of Mary in the Spirit highlights the value of the human body, Christian purity and the commitment in general of the believer who lives in hope the expectation of the resurrection. The action of the Spirit already carries with it the sign of fulfillment; the Spirit "embellished that heart and made it the masterpiece of grace, worthy of stealing time for eternity." (Conversations, p. 228).