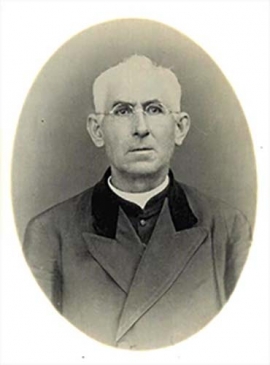 (ANS - Occimiano) - Occimiano is a burgh located at the foot of the Monferrato hills and which historians identify as one of the leading municipalities for its importance in the Middle Ages.

Don Bosco's passage here on the evening of 12 October 1861 was meaningful. A boy had already been born six years before, a boy who would have carried the name of Don Bosco to the ends of the world: Evasio Rabagliati. He was born on 20 January 1855. At the age of 14, in 1869, in the Salesian house of Mirabello, the first meeting with Don Bosco took place. The very young Evasio was conquered: from that moment he never left Don Bosco, becoming one of the intrepid pioneers of the first Salesian missionary era.

A year after the perpetual profession made in the hands of Don Bosco on September 15, 1876, he embarked from Genoa for Buenos Aires with a group of missionaries led by Fr Francesco Bodrato. Here, on 22 September 1877, he was ordained a priest, the first Salesian ordained in the Americas. Shortly before departure, the whole Rabagliati family was received in special audience by Don Bosco. After a moment of prayer, our Saint whispered these prophetic words: “I bless four Salesian priests and a Daughter of Mary Help of Christians and the whole Rabagliati family here united.”

Thus the Rabagliati family on that day: their father Luigi, 44 years old; mother Teresa Unia, 42; Evasio, cleric, 21; Giuseppe, 19; Clementina, 13; Eugenio, 10; Silvestro, 5; Paolo, just 1, in his mother's arms. That date marks the last time the Rabagliati family found themselves all united. Religious obedience subsequently brought Evasio to Argentina, Chile, Colombia; Clementina to Argentina and then Spain; Eugenio to England; Silvestro to Colombia and then the United States; Paul to Chile. Fr Evasio was a zealous apostle, a great communicator, first in Argentina and then in Chile.

In Colombia, Fr Evasio started the Salesian work where he worked for poor youth. But the country's particular situation led him to devote himself mainly to the care and assistance of lepers in Agua de Dios and in other areas of Colombia. He also made a trip to Norway for them to meet Gerhard Henrik Hansen (1841-1912), who in 1873 had discovered the bacterium responsible for leprosy.

Agua de Dios is still today a testimony of Salesian charity and hope among lepers, where the pioneer animator was Fr Evasio and, with him, Blessed Fr Luigi Variara. When his health began to fail, he was transferred to Chile, where he died on May 2, 1920. On the day of his death he left in his room an envelope addressed to Fr Luigi Variara for the feast day of Mary Help of Christians with this testament: "Always and everything for lepers."

On the death of Evasio, the Colombian government proclaimed a day of national mourning, such was the esteem for the great missionary. In this 2020, Occimiano commemorates the centenary of the death of this extraordinary fellow citizen, a witness to the generous courage of his people amid the most fragile and discarded people.