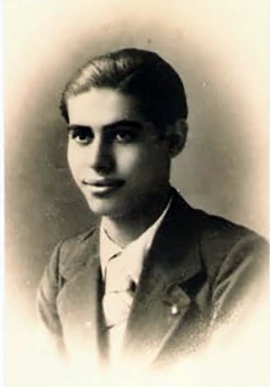 (ANS - Jaén) - “I'm a worker; I was born to parents who also were. I've lived and I live in the narrow environment of the humble classes and I feel protest running through my veins, exacerbated at times by the fire of youthful enthusiasm, against those who believe that we are not men like them because we had the misfortune - or perhaps fate - of being born into poverty. But let's clarify the concepts: I'm a worker and I'm a Catholic.” Thus spoke Bartolomé Blanco, a young man of 19, a chairmaker, who grew up in a Salesian oratory and a model of an engaged young man and devoted fiancé.

Bartolomeo was born in Pozoblanco, Spain, on December 25, 1914. His mother died of the "Spanish flu" epidemic before the child was four years old. Son and father went to live with their aunts and uncles. Also orphaned of a father at the age of 12, he had to leave school and work as a chairmaker. When the Salesians arrived in September 1930, he attended the oratory and helped as a catechist and grew up in intellectual, cultural and spiritual formation. He entered the Catholic Action, of which he was secretary and specialized in the apostolate among the workers at the Social Workers' Institute in Madrid. An eloquent speaker, scholar of the social doctrine of the Church, he met with the Catholic workers' organizations of France, Belgium and Holland. Appointed delegate of the Catholic trade unions, in the province of Cordoba he founded eight sections.

When the revolution broke out on June 30, 1936, Bartolomeo returned to Pozoblanco to defend the city, which however fell after a month. Accused of rebellion, he was jailed and sentenced to death. “You believed you were hurting me and instead you are doing me good because you are chiseling a crown for me,” he said. He was shot on 2 October 1936 in Jaén, shouting "Long live Christ the King!" He was beatified on October 28, 2007.

Shortly before his death he wrote letters. To his aunts and cousins: “I ask you to avenge me with the revenge of the Christian: repaying with good those who have tried to harm me.” And to his girlfriend, Maruja: “I just want to ask you one thing: that in memory of the love we had for each other ... You take care of the salvation of your soul as the main objective, so that we can meet in heaven for all eternity, where no one will separate us.”

The testimony of Bartolomé Blanco - a young man who rejected any compromise or mediocrity, who stood by the poor defending their rights, without allying himself to totalitarian positions and violent ideologies, and who shared with many friends a position in favor of the dignity of woman - has a prophetic charge that deserves to be made known to young people today.

To whom he himself could say again: “We are young and therefore we cannot remain inactive; Catholics and thus we cannot look with indifference at the innumerable injustices of modern society ... We are young, young Catholics who cannot be satisfied with listening to a Mass and giving a few cents to the poor.” (El Cronista del Valle, 25 May 1935)