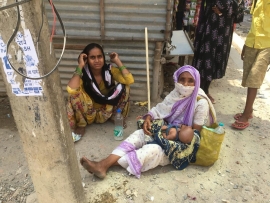 (ANS – New Delhi) - Turn your gaze to the developed and growing cities of India and become aware of the No Where people of India - the people who built all these cities live in poverty and deprivation. They belong nowhere. Because they are Nowhere People.  As Salesians, we must find the courage to create spaces and allow new forms of hospitality, fraternity and solidarity.

Our cities are with ultra-modern facilities vying with any of the cities across the world. We can find office complexes, malls, shopping centres, and high rise, cozy apartments. The rich find their homes and living spaces away from the traffic and pollution of the cities of India. But the people who built all these cities and serve the comfort of the occupants just live across the road in poverty and deprivation. They live under tin sheets, cramped quarters, without drinking water, toilets and light. The sewerage flows like a canal along the streets. Garbage is strewn all over the allies. The road is anything but a road with potholes and stagnant water. They live in dark airless, stinking quarters that resemble a stable. This is what they get after labouring for years to build the ultra-modern cities. They are the NO WHERE people of India. They originate from all over India. They have been brought to the cities years back by building and manpower contractors to work in the construction sites. They were employed to build roads, metros, malls, offices, and housing complexes.

Once the work was completed, they were left to fend for themselves. While they were working, they did not have time to look after their children. Most of the time the children are left for themselves the whole day. The most affected are the children who lose all their childhood in the construction debris. They are illiterate, malnourished, unhealthy, and unaware of the wide world brimming with possibilities.  They are now illiterate and unskilled young people. They are ready to be a mass of construction labourers for another owner. The biggest loss of the nation is the loss of childhood for these millions of children.

After being in this location for several years, they do not have much of a connection with their native land. They do not belong to these cities. Because they are sour to the eye of foreign investors who want to see the thriving cities. They cannot go back; they do not have any land or property to fall back in their own native places. In the bargain, they have lost their culture, language and ethnicity.  They are taken to all across India to build the future of the nation's iconic cities...They belong nowhere. Because they are Nowhere People.

As Pope Francis reminds us, “The pandemic has reminded us of how essential co-responsibility is, and that only with the contribution of everyone – even of those groups so often underestimated - can we face this crisis. We must find the courage to create spaces where everyone can recognize that they are called, and to allow new forms of hospitality, fraternity and solidarity.”