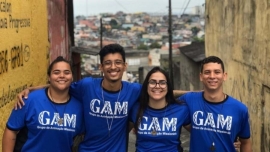 (ANS - Brasília) - This year the traditional missionary weeks animated by young Brazilians who frequent Salesian environments have been adapted due to the Covid-19 pandemic. Instead of formation and visits to the communities, the Provinces have joined in online activities and celebrations, obviously without losing the typical Salesian joy.

How can we keep missionary commitment alive in times of pandemics? This was the great challenge of the Salesian Provinces in Brazil this year. One of the ways found was the promotion of digital activities, so that groups of young people do not lose their links and relationships. “We worked to ensure that the groups continue to meet, pray, reflect, and form together. And at the same time, we tried to strengthen solidarity with the poorest,” explains Fr Sérgio Ramos de Souza, Delegate for Salesian Youth Ministry and responsible for Vocations and Mission Animation in the "Saint Pius X" Province, based in Porto Alegre (BPA).

In the "St Luigi Gonzaga" Province of Recife (BRE), the Missionary Commission also promoted a large digital meeting last July. The objective was to celebrate one year of the Salesian Youth Mission held in three rural communities of Gravatá in 2019. “We realized that we could not stand still, so we decided to bring together all the young missionaries and members of the communities who participated in the mission for a great night of gathering,” says Fr Renato Jorge de Morais, Provincial Delegate for Mission Animation.

In the Northeast, moreover, social isolation opened up space for a series of joint digital actions between the Mission Animation groups and the Salesian Youth Movement, which share the initiatives carried out on social networks.

The pandemic has not prevented groups linked to missionary animation from organizing themselves to carry out actions in favor of the most needy population. This was the case in the Province of Sao Paulo (BSP) – for example - with the Missionary Animation Group (GAM) of the Salesians of Araras who collected almost half a ton of food during the first Solidarity "Drive Through" held in August near the shrine of the Sacred Heart.

The missionary weeks have the objective of allowing adolescents and young people to have a profound experience of God through volunteering. “In Salesian Brazil, we have different missionary experiences, each with a type of organization, activity and duration. These are initiatives that sensitize many young people to give a convinced 'yes' to other more intense mission experiences of voluntary service, both inside and outside the country, what we call Salesian missionary volunteering,” concludes Fr Ramos de Souza.