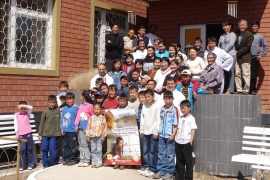 (ANS – Darkhan) – Darkhan Oratory in Mongolia is actually the first activity of the Salesian mission in Darkhan City, where the first two Salesians reached Darkhan in April 2005. One of them was Fr Andrew Nguyen Trung Tin, who today tells about the Salesian Mission in that land.

While the country was still covered by winter snow, white everywhere, we took a tour around the market and village roads. It seemed that no one saw us because the people were inside their ger (=tent) or houses, the children were in school and only some dogs were barking.

We started with a ball, we went to school where we had children, asking permission to play with the children, and the school manager allowed us to do so. We came in with balls and also with bags of candies. After getting to know them and becoming friends with the Darkhan youth, we became a babysitter for some kids around! Their parents entrusted their children to us to keep them safe until their return home.

After some time, we invited them to our house, that means they slowly became our friends in the Don Bosco playground, school and youth centre. In this way, the children and youth learned the meaning of Oratory, the place for prayer, recreation and a house for them to stay, to be really themselves - like at home.

Now, after 15 years, the mission for the youth is still going on, even though some difficulties are there, but the Salesians with their lay mission partners, Salesian Cooperators, run the Oratory here daily - really 24/7. Although we don’t have a gym, hall or proper place for indoor games or larger recreation rooms, we never stop the daily Oratory for the young.

I don’t know in how many places around the world the Salesians are running an Oratory like at Darkhan. Within the limits of the Mongolian social system, of the harsh weather, we are doing our best to be with the young - like during the summer heat (30° C) or the 6-month long winter's extreme cold, minus 30°-40° C! Here with the terrible cold even the basketball can’t bounce anymore after some minutes outdoors - so you have to use all your strength of hand and arm to make it bounce and play! And actually, the ball lasts only a few weeks and is destroyed fast, it bursts because of the cold! Such is the cold of a Mongolian winter!

But the young people come here daily with their friends, with their smiles, with their happiness for Oratory time. We also have a small library for them, music class, humanity lessons, farming during summer, outings, tours around the country, sometimes they allow us to go abroad with a message and our music and dancing group. Twice a month they have a formation session for youth leaders to foster a quality group experience. There is also an evening class for the poor youth, assisted by our staff and Salesian Cooperators. We also provide some food for dinner, cooked together by the youth and our staff, then after study time before returning back home one Salesian shares a Goodnight.

Now we have training for basketball, volleyball and football, the 'coaches' are some grown-up Oratory youth who in their turn now take care of their younger 'siblings'. On Saturday evenings after sport, the young people gather in front of our Mary Help of Christians statue to recite one Mystery of the Rosary and after the Goodnight, there is the send-off with some candies.

All of us Salesians in Mongolia are missionaries - once you are a foreigner, and not so young anymore, to follow the youth in the Oratory is physically really a big challenge, it's not easy: to assist running and playing, waiting at the side of the playground for your turn without moving - you would be soon frozen! It's not easy for you to be outdoors during the whole Oratory time from 4:00 pm to 5:30 pm daily or one hour more on the weekends.

Such is our life and mission here in the Darkhan Oratory: I am happy to be with our children and you can see their sad feelings, being cored without the presence of the Salesian among them! Here in Mongolia just to be (presence!) with the young is already a meaningful missionary action as my sacrifice and penance! Sometimes we Salesians wish to do many things, dream big - but our reality does not allow us so! Even our own confreres sometimes don't like the way we are doing it - since it seems like they do nothing! But if you ask the Darkhan young people around here what kind of Salesians they need - they can tell you!