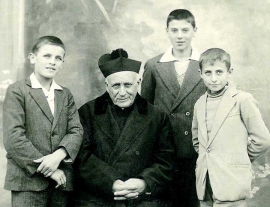 (ANS - Rome) - On Saturday 5 December the Salesian Family recalled the liturgical memorial of Blessed Philip Rinaldi (1856-1931), Don Bosco's III Successor at the head of the Congregation. From his first profession, in 1880, until his death as Rector Major, he was involved in a great variety of Salesian charismatic enterprises, while always maintaining a rather low profile.

As a young priest he dealt with "late vocations" and, as Rector Major, launched the network of aspiring missionaries (the first erected in 1922 in Ivrea). During his Rectorate (1921-1931) the number of professed Salesians, after the horrors of the First World War, increased exponentially: from 4,638 Salesians and 437 novices in 1921 to 8,059 Salesians and 895 novices in 1931. He was distinguished by his missionary zeal. The 61st Salesian missionary expedition, in 1929, was the largest in Salesian history: 374 Salesians and 103 Daughters of Mary Help of Christians left.

He was responsible for the growth of the Salesian Family: he established the association of Past Pupils and founded the Secular Institute of Don Bosco's Volunteers (VDB). He consolidated the structure of the Salesian Cooperators and, through ADMA, promoted a strong devotion to Mary Help of Christians.

Even as Rector Major he was involved in the spiritual guidance of many, dedicating a lot of time to Confessions. His care for the interior life of the Salesians and the members of the Salesian Family made the great vocational and missionary movement possible. On the occasion of his feast day, the VDB shared some of the "Thoughts" of Blessed Philip Rinaldi, listed below: