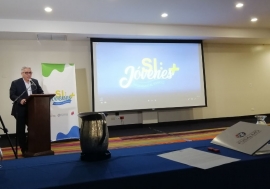 (ANS - San Salvador) - The Salesian organization "Fundación Salvador del Mundo" (FUSALMO), with the support of the Latin American Faculty of Social Sciences in Costa Rica (FLACSO Costa Rica) and the Research Center for International Development (CRDI), has presented the systematization of the socio-occupational management program whose main objective was to present the results of the research "Entrepreneurs and employment of young people residing in contexts of violence in El Salvador: an analysis of socio-occupational trajectories and culture of company [business]". The event took place on 2, 3 and 4 December in San Salvador.

During the research, various initiatives were carried out for technical and complementary training, job intermediation and entrepreneurship through the "Youth Creating Future" project, which is responsible for preparing the beneficiaries of the initiative in various areas of expertise for their first job. In this process, a total of 651 young people, residing in the municipalities of Soyapango and its surroundings, benefited from the project and obtained a diploma that accredits the formation received.

At the same time, the objectives and scope of the systematization were illustrated, as well as the generalities and the progress made by FUSALMO. The analysis of the "Youth Creating Future" project, which was the major project of the Social-Work Management Program, divided the areas of action, the most important axes and the attention path or focus of the beneficiaries.

During the event, the "YOUTH: YES + betting on development" campaign was also presented, through which the opening of job opportunities for young people is sought within Salvadoran companies engaged in the growth of the country and its labour force, as well as promoting a more inclusive perception of the talent of young people living in economically and socially stigmatized areas in El Salvador.

FUSALMO shall continue to work through its programs and projects to improve the well-being and quality of life of the most vulnerable Salvadoran children and young people, contributing to the development of their capacities, so that they become citizens capable of generating significant changes in society.