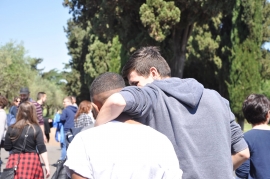 (ANS - Rome) – The new report on the activities of the "Borgo Ragazzi Don Bosco", the emblematic work of the Salesians in Rome, was published a few days ago, one completely dedicated to the most fragile and at risk minors. Entitled "No home is far away", the document presents the help offered, in the context of the pandemic, to 1,045 children and 389 families. Numbers behind which are hidden the difficult stories of many young people, such as Maria, Massimo, Francesco ...

From courses at the Vocational Training Center to the oratory, from the reception center for minors to school support, from semi-residential care to the family home, there are dozens of activities that the "Borgo Ragazzi" offers to hundreds of young people every day. “In the ordinary, it can happen that each educational area follows its own path,” explains the director Fr Daniele Merlini. “In the emergency, instead, we felt united: a community of communities where no one was left alone but all shared the same concerns, paying constant attention to the most fragile.”

In a few days, the operators became IT experts “putting their creativity to work to look for the children through any channel,” says the priest. Many families with only a mobile phone were given tablets, laptops and internet connections to be able to hold online meetings, but also to spend a few hours of joy with mini-game tournaments.

The biggest concern was not to abandon young people, “especially the more timid and introverted ones with whom a journey had begun,” specifies Simona Arena, a 25-year-old operator. “After the lockdown with some it was necessary to start all over again.”

As in the case of Maria, 18, born in Rome to parents of Asian origin: she wants to “westernize”, while the family wants to keep their traditions. The two months spent at home have nullified the progress made in four years in semi-residential care.

It was difficult to recover the path even with Massimo, 17, to whom his mother transmitted the phobia of infection. “We spent whole afternoons mediating between the two, trying to bring some serenity back into their relationship,” says Simona.

Francesco, on the other hand, who lived for four years in the "Borgo Ragazzi" family home and who, thanks to the pizza chef course organized by the work, had found a job and even a room to rent, but lost his job during the lockdown. “But he did not give up because he knew that here he would find a family ready to support him,” continues Fr Merlini. And, in fact, Francesco is among the 20 young people that the operators accompanied in the search for a new job and he started working in a bakery again a few weeks ago.

In recent months, the Director concludes, there has been “an extraordinary generosity contest ... Many young people who have attended the 'Borgo Ragazzi' in recent years have volunteered or made donations.”