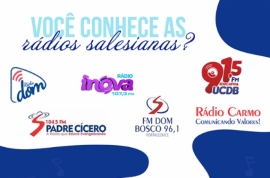 (ANS - Brasilia) - World Radio Day is celebrated every year on 13 February. To celebrate the anniversary, the Salesian Network of Brazil has decided to present the story of the six Salesian radios active in the country.

FM Dom Bosco (Fortaleza, CE - FM 104.5 MHz) was founded in 1997. Initially established as a community radio, after many efforts by the Salesians and many people of good will in Fortaleza, it obtained the concession to broadcast via ether, becoming precisely "FM Dom Bosco". Today it stands out on the Ceará radio and television scene with educational, cultural, informative and religious programs.

Radio Padre Cícero (Juazeiro do Norte - FM 104.9MHz) belongs to the Salesian Educational Foundation Padre Cicero, a non-profit organization which aims to transmit educational, cultural, scientific, artistic and religious contents aimed at the formation and maturation of the human being. It is inspired by the social, educational and religious testimony of Don Bosco and Father Cicero Romao Batista (1844-1934), a very active priest in the defense of the poor and the exploited.

UCDB Educativa FM radio (Campo Grande, MS - FM 91.5 MHz) works in a Salesian style with popular youth culture and society in general, educating, guiding, informing and involving the community in its various activities. It belongs to the “Fundação Dom Bosco” and broadcasts educational, cultural, scientific, artistic and religious programs, thus contributing to the formation of people.

Radio Dom (Lorraine, SP - webradio) was founded on 3 April 2017 at the Salesian Novitiate in Curitiba with the name of "Radio SDB CURITIBA". The specific objective was to involve young people with a criminal record in the production of radio programs, as well as disseminate other programs made by novices. Having become an official partner of the Salesian Network Brazil - Communication, it has established synergies with various broadcasters, including Vatican Radio, and for a certain period it was called RÁDIO SDB BRASIL. It took on its current name since the main studio was moved to Lorraine, near Sao Paulo, and now the local Province has taken over the leadership of the broadcaster. Higher Education students, professors, members of the Salesian Family and other collaborators contribute to the programs and activities of Radio Dom.

Rádio Carmo (Guaratinguetá, SP - webradio) broadcasts via the internet and is the result of the Educommunication project of the Carmo Institute of Guaratinguetá, SP. It was inaugurated on April 24, 2019 and involves the school's students in its programs, as well as parents, teachers and all those who are available to animate an open space for discussion for the community. The goal is to raise awareness of the formation of a true communicative and educational ecosystem. The programming also includes programs from partner stations such as Vatican News and Radio Senado.

Rádio Inova (Lorraine, SP - FM 107.3) is a legally registered educational radio station belonging to the “Fundação Olga de Sá”. Its mission is to share the initiatives of social entities, promote programs to combat drugs, campaigns on dengue, alcoholism, environmental care and health, as well as covering cultural and educational events.