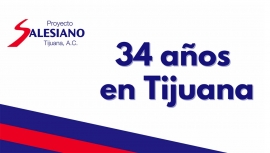 (ANS - Tijuana) - The "PROYECTO SALESIANO TIJUANA, AC," is a non-profit organization that seeks the integral promotion of children, young people, adolescents and vulnerable people through the Salesian charism, carrying out preventive actions aimed at forming "Good Christians and upright citizens". And this month of March is significant for the Tijuana Salesian Project, because it commemorates the 34th anniversary of its foundation.

On the occasion of the anniversary, the Director of the Project, Fr Agustín Novoa Leyva SDB, said:

To strengthen our identity we live the elements that nourish us day by day, such as CHARITY which is the GIFT that gives meaning to our life and thanks to which we consider those who are deprived of what is necessary as a member of our family, friend, brother. The little we have, if we share it with love, never runs out, but becomes a reserve of life and happiness.

At the "Proyecto Salesiano Tijuana" we want to be an association that forms good Christians and honest citizens, with constant updating, resilient to social, economic, religious changes, by accompanying our recipients, so as to become a point of reference in integral promotion of the person, in the social with coherence between our faith, life and ecology.

To continue moving forward in our processes, dreams and hopes, each of us must accept and live the Truth that has manifested itself in Christ. Living FAITH in Christ. This means first of all letting oneself be reached by the Word of God. This Truth is not a construction of the intellect, destined for a few chosen minds, superior or illustrious, but it is a message that we receive and can understand thanks to the intelligence of the heart, open to the greatness of God who loves us even before we are aware of it.

Now in our 34th year of activity, we believe in the meaning of our action for the good we do for the society of Tijuana and for the Church of this Archdiocese, and for this we are moved by HOPE. In the current context of concern in which we live and in which everything seems fragile and uncertain, talking about hope could seem like a provocation. If we want to nourish, transmit and spread hope, let us be more careful to speak "words of comfort, strength, consolation and encouragement", instead of "words that demean, sadden, anger or show scorn" (Fratelli tutti, 223). Sometimes, to give hope, it is enough to be " a kind person... willing to set everything else aside in order to show interest, to give the gift of a smile, to speak a word of encouragement, to listen amid general indifference." (ibid., 224).

On this 34th anniversary and in those to come, with the grace of God, we offer hope as inspiration and interior light, which illuminates the challenges and decisions of our mission.