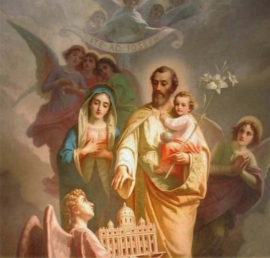 Detail of the canvas painting by Giuseppe Rollini (19th cent.) for the Basilica of the Sacred Heart in Rome

(ANS - Rome) - On the eve of the Solemnity of Saint Joseph, and in the special year that Pope Francis has dedicated to the Patron of the universal Church, the Salesian Family can look to Don Bosco to learn from him how to follow the foster father of Jesus.

From many of Don Bosco's writings it is clear how much the Piedmontese Saint loved Saint Joseph: he had nominated him among the patrons of the Oratory, had placed the artisans under his protection and had proclaimed him ... protector of students during their school exams.

In the text of the Companion of Youth, il Giovane Provveduto, he writes: “Saint Joseph, having had the enviable fate of dying assisted by Jesus and Mary, is given as Protector of the dying. During our life let us ​​show devotion to St. Joseph in order to have him help us at the moment of death.” (il Giovane Provveduto, OE XXXV, 3)

On the evening of February 17, according to the Biographical Memoirs, Don Bosco said to his young people: "Tomorrow the month of St. Joseph begins and I want you all to place yourselves under his protection: if you pray to him from the heart he will get you whatever grace, both spiritual and temporal, you may need”. (Memorie Biografiche VII, 636)

And in the booklet Life of St. Joseph he wrote, he declares: “Must we not believe that among the blessed who are the object of our religious worship, St. Joseph is, after Mary, the most powerful of all with God, and the one who more justly deserves our trust and our homage?”

Don Bosco used St. Joseph for all his needs and urged others to invoke him. He spoke several times throughout the year of the efficacy of his intercession; Don Bosco had the feast day of patronage celebrated on the third Sunday after Easter. He was very happy when, on 8 December 1870, Pius IX proclaimed St Joseph as Patron of the Universal Church; and in 1871 he declared that in all his Salesian houses there should be a day of rest on 19 March.

In the churches that he built, Don Bosco always wanted an altar to be built to St. Joseph. Thus, in fact, the pilgrims who, in the footsteps of Don Bosco, visit the Basilica of Mary Help of Christians in Turin and that of the Sacred Heart in Rome, can still admire two splendid paintings depicting him, always together with Mary and Jesus.

In the Turin painting, by Tommaso Lorenzone, Jesus hands Saint Joseph some roses, which he offers as graces on the house of Valdocco.

In the Roman work, by Giuseppe Rollini, the Patron and Protector of the Catholic Church majestically manifests this function, guarding St. Peter's Basilica a kneeling angel presents to him. Both canvases are surmounted at the top by cherubs who unroll a band, on which the message for the observers is made explicit: “Ite ad Joseph”, “Go towards St Joseph!”.