Italy – Agnelli family and "Edoardo Agnelli" Institute in Turin: a partnership that continues in the name of service to young people
Featured 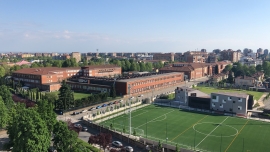 (ANS - Turin) - One hundred years ago, on 12 March 1921, Gianni Agnelli was born in Turin, a leading figure in Italian public life throughout the twentieth century. The Salesians' "Edoardo Agnelli International Institute" is closely linked to his family: it takes its name from his father, who tragically died in a plane crash in 1935, when his son Gianni was just 14 years old.

The Rector Major of the Salesians of the time, Fr Pietro Ricaldone, narrates: “When the tragic death of the beloved Edoardo fell upon the senator (Giovanni Agnelli senior, Ed.), he could not find comfort in his torn heart. He came to visit me to show me his plan: to create a popular institution named after his son. I told him: in Turin, the cradle of Fiat and the Salesian house, a mechanical institute of a national and international character could be built; it could train subjects from Turin and other cities wishing to complete their professional culture and technique. Returning to their lands they would bring in their eyes the vision of the grandeur of Fiat and would be effective disseminators of its impressive production and wonderful equipment. The senator approved the projects.”

The works began with the laying of the first stone on 3 July 1938. The project is by the architect Giulio Vallotti, a Salesian brother, also known for his other works, such as: the sanctuary of Madonna di Lourdes al Selvaggio di Giaveno, the sanctuary of Santa Rita in Turin, the extension of the Maria Ausiliatrice basilica in Valdocco. On an area of 40 thousand square meters there are: an oratory with church and hall-theater; the classrooms and workshops on corso Stupinigi - now corso Unione Sovietica - with a grandiose church-shrine, which remains in the plans, and the works for the parish of San Giovanni Bosco. The Salesian community was formed in October 1940.

On April 19, 1941, Cardinal Maurilio Fossati, in the presence of the senator and his nephews, blesses the new church where the following day Fr Ricaldone celebrates Mass and Cardinal Vincenzo La Puma, prefect of the Congregation of the Religious, blesses the premises.

La Stampa, a leading Italian newspaper, of 16 May 1993 reports the celebrations for the 50th anniversary of the Institute, Senator Gianni Agnelli (junior) among the young people present: "The Edoardo Agnelli Institute, one of the flagships of the Salesians, has been producing appreciated technicians for half a century and welcomes 750 students."

"In the years of development and up to the gates of 2000, it was Gianni Agnelli who gave support to our society, contributing in part to the payment of heating and providing some engineers for teaching at the Technical Institute. And even today our Institute is experiencing the proximity of the Agnelli family: in view of the innovation and strengthening works of the Technical Institute, which will be carried out next summer, the Agnelli Foundation has guaranteed its contribution to the costs," adds Fr Claudio Belfiore, Director of the Agnelli Institute.

The Salesian work still continues to invest in young people today and for the future. Proof of this is, for example, the new theoretical-practical path of industrial robotics, an intuition of the Mechatronics department that aims to make students the next protagonists of industry 4.0.