Italy - Salesians Perugia: in 2022 the first 100 years of presence in the city
Featured 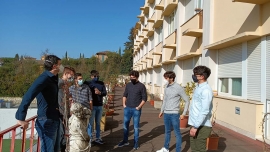 (ANS - Perugia) - In 2022 the first hundred years since the arrival of the Salesians in Perugia will be celebrated. A real "jubilee", as Fr Wieslaw Dec explains, a Salesian of Polish origin who has lived in Perugia for three years. “Our life is made up of rhythms, cycles, the alternation of ordinary days, ordinary time with holidays. I believe it is necessary to celebrate our anniversaries. For this reason, we started thinking about this centenary three years in advance, planning many initiatives to remember and show gratitude to God for what we have been able to do in the city of Perugia.”

There are three watchwords that the Salesians use for this important birthday, as Fr Wieslaw reports: gratitude, renewal and return to the young. “We are grateful to generations of lay people and benefactors, to the civil and religious authorities and to the whole Salesian Family who supported this work,” explained Fr Wieslaw. “Even before the events that we will do, rediscovering our basic identity with this jubilee is meant to be a thanks. Renewal: we would like to renew our fidelity to Don Bosco, but also to renew ourselves, to respond to the challenges of today's young people, even during the pandemic. Return to the young: we would really like to return to the young. This jubilee is the means to make us close to the young, because we feel we have a great responsibility in Perugia but also to verify if our presence and our activities are at the service of the poorest young people. There is in fact much moral, value and spiritual poverty.”

There are three stages to the Salesian presence in Perugia. The first began in advance of actually arriving in Perugia, when in 1915 a group of Salesian Cooperators already existed in the city. “They had,” explains the priest, “the great merit of having prepared the arrival of the Salesians in the city. They have always been present in the Salesian house with a great charismatic quality. They strongly insisted that the presence of Don Bosco's heirs in Perugia become a reality. Other great work was done by the group of Past Pupils of the Salesian Institutes of Gualdo Tadino and Trevi that had formed an association in 1920. It was they who welcomed the first three Salesians to Perugia on 2 October 1922. A second stage is marked by the arrival of the Salesians to the 'Colleggio Penna Ricci' until 1958. The boarding school has formed generations of Perugians. Thanks to them, the Salesian influence in Perugia was very significant. The third period begins with 1958, when the Salesians move to their current location in Via Pellini. The new headquarters will house the middle school, the sports fields and the high school.”

In 1981, exactly 40 years ago, the Vocational Training Center was born. The recreational spaces were completed with a new gym. The Polisportiva Don Bosco has continued to grow until reaching about 350 members today. After the closure of the School, the Institute was transformed into a University Residence which today houses about thirty students.

“Today we have a great desire to continue to be present among young people and we are aware that we will have to reshape our educational proposal to be able to reach them,” continues Fr Wieslaw. “We are facing a world that has completely changed in a few months. We are already working, meeting with the institutions to understand what offer we can give to the city. We are moving towards new projects to continue in our educational service. This situation is a favorable time to devote time and energy to serious reflection on the future of our educational proposal for young people in the city of Perugia.”