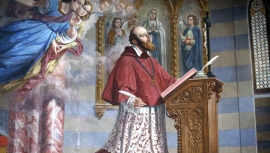 (ANS - Turin) - Without the action and the person of Francis de Sales, would there ever have been the Don Bosco of the Preventive System? And why did the Saint of Youth choose him as a source of spirituality for the congregation he gave life to? Even more radically: “Was Don Bosco a true SALESian?” These questions were answered by Fr Gianni Ghiglione, one of the greatest connoisseurs of St. Francis de Sales' thought.

For Fr Ghiglione some expressions that embody the Preventive System - “it is necessary to win the hearts of young people”; “To be authoritative you need to be loved”; “Let us form good Christians and upright citizens” - even if they spring from the heart of Don Bosco, they started from the mind of Saint Francis de Sales.

These roots take nothing away from the genius of Don Bosco, who was able to translate the intuitions and innovative methodologies making them the cornerstone of his service to young people, especially the most "at risk". And when it is necessary, as in this time, to face the educational emergency, the search for those roots and their extension to the present is a commitment to be assumed in the Salesian house and beyond.

The first is the sense of friendship: one finds ample traces of it in his biography and precise definitions in his letters. “When he finished his studies in Paris, his return to Annecy was a march of over 300 kilometers on foot, on horseback and in a carriage together with four of his fellow students with whom he evidently had a very close relationship ... His writings, his letters are a mine of considerations and testimonies on friendship,” Fr Ghiglione recalls.

He is also a model for today's young people: “They have a tendency to keep their eyes down, bent over their mobile phones: they should rather turn it to the gaze of others in an interpersonal exchange,” Fr Ghiglione recommends.

“The second thing is the care of one's character. He was not born a saint: he had a proud temper, ready to take action against adverse people.” The mild manner commonly attributed to the holy Bishop was not an expression of his character, but of a committed education of this. Self-control - which he adhered to in his relationships with others and in carrying out his pastoral ministry - is part of his spiritual asceticism. It was a lifelong education not to the repression of feelings, but to their conversion in empathy towards others.

Salesianity is this, and Don Bosco made it a standard bearer by embedding the name of Francis de Sales in the shield of his religious 'family': “A project for the education of young people that has gradually extended to the whole world as it obviously is at every latitude, based on the well-known principles of loving-kindness, reason and religion,” Fr Ghiglione reaffirms.

Finally, he concludes with satisfaction: "Ours is a method that comes from afar and goes far!"