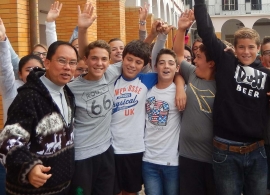 (ANS – Rome) – “Missio inter gentes” is a neologism, therefore it is important to correctly understand the term because it has profound consequences in our missionary activities today.

After Vatican II, unease grew in Asia – a land of ancient religions, rich cultures and myriads of poor people – about “missio ad gentes”. It was perceived as an insensitive monologue that created a relationship of teacher-pupil, foreign missionary-local people. In fact, St. John Paul II had lamented that Christianity is still considered “foreign” in Asia, even though Jesus was born in this continent! (Ecclesia in Asia n. 2).

Unlike foreign missionaries, a growing number of missionaries from Asia and Africa now working in their own continents, have breathed multiculturalism and interculturalism from birth. They have direct personal experience of the poorest contexts since childhood. They see their missionary activity, less as a direct proclamation of the Gospel and more as the incarnation of the teachings and person of Jesus through the witness of love and service.

“Missio inter gentes” is not in opposition but complementary to “missio ad gentes”. What distinguishes “missio ad gentes” from “missio inter gentes” are their two preceding prepositions which specify the attitude towards the “gentes”.  The preposition “ad” indicates an attitude which sees the other as the goal, the point of arrival, the receiver.  While “inter” indicates being in the midst of people establishing a relational connectedness with them.

“Missio inter gentes” is a way of proclaiming Christ by living the evangelical values. It advocates that missionaries serve people with respect, and humbly share their lives without any trace of arrogance or superiority, just as Jesus did. The charitable activities of individual Christians and the entire ecclesial community reincarnate the face of Christ. It is this lived experience of Christianity, through the action of the Holy Spirit, that could stir up the desire to know the person of Jesus.

“Missio inter gentes” is a missionary approach, applicable in every context, that sees the “gentes” not as targets of our efforts to convert, but as “guests” to whom we can offer hospitality, and “hosts” who can, in turn, welcome us and offer us friendship. This is not a silent, wordless witness. The Gospel is shared by narrating one’s own experience of faith among (inter) friends of other cultures and religions and by whispering the Gospel at opportune and unexpected moments.

The heart of “missio inter gentes” is initial proclamation. Thus, its primary concern is to foster initial proclamation and not to teach Christological doctrines or to convert. Conversion is God’s internal call and the person’s free decision, not our work! By living our life in permanent state of mission, we shall not be timid when the Holy Spirit opens the door for us to proclaim Jesus Christ as the Saviour!

FOR REFLECTION AND SHARING