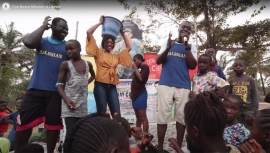 (ANS – Monrovia) – Liberia is the great country of freedom, but the 14 years of civil war (1989-2003) devastated the social, physical and psychological fabric of this West-African state. The conflict left the country in economic ruin. In addition to the conflict, the outbreak of Ebola in 2014, which led to the death of the parents and breadwinners in many families, rendered many young people homeless and without hope. The Salesians came to Liberia in 1979 and are currently working in the Capital Monrovia and in Tappita, a rural town located in Nimba county in the eastern part of Liberia.

The “Sean Devereux Don Bosco Youth Centre” was founded in 1991 to cater for former child soldiers and other young people in Monrovia. The youth centre with its dynamic activities, and the Oratory with the friendly spirit of Don Bosco, helped many children and young people to recover from the effects of the war and to be rehabilitated into society.

The Youth Centre is situated in Matadi, among some of the poorest residents of Monrovia. Most of them are petty traders but many others are jobless and struggling to provide for their families.

Most of the youth from Matadi come from families that can barely afford a single meal a day. Homes are poor and overcrowded, with parents sharing a room with their children, and children sharing a room with many other children. Matadi has no electricity supply. Many of the people live in darkness by night because they cannot afford a generator.

Many of the young people call the “Sean Devereaux Don Bosco Youth centre” their home. Every evening the youth centre is packed with over five hundred young people. They come to the centre to learn, to acquire life skills and engage in sport and cultural activities under the guidance and supervision of Salesians, trained staff and volunteers. The guidance of the Salesians empowers young people and helps them to regain their confidence and set positive goals for their future.

The second Don Bosco Youth centre is in the rural town of Tappita. Part of the road to Tappita (100 km) is not tarred and it is very rough. Tappita is not accessible for long periods during the rainy season. It is isolated from the Capital and commercial activities are brought to a standstill. This causes great hardship for the local people: the impossibility of access to hospital, having to travel long distances by motorbike, difficulty in procuring provisions, and an increase in the cost of fuel and basic amenities. The extreme material poverty in Liberia causes a wide range of physical and psychological consequences. Young people suffer many hardships.  Many are from broken families and are left to cater for themselves. The Youth Centre provides a homely environment for them where they feel welcome, a school where they can learn, and a playground where they can make friends and interact with others.

The Youth Centres in Matadi and Tappita have many amazing success stories of young people who endured hardship during their childhood and with Don Bosco’s helping hand achieved success in life.

One of these is Amy Karpu, now a 21-year-old student of the Starz College of Science and Technology. As a child, she had to overcome fear and isolation. With the help of the Salesians she has improved, got back her confidence and she is now one of the most hardworking and committed animators of the youth centre. She constantly expresses her gratitude to the Salesians for their support and guidance during her education.

Amounchen Dossen is currently studying Economics in the “Stella Maris Polytechnic University”. He started his journey in the Youth Centre in 2005, when his father couldn’t pay his school fees. He received a scholarship from the Youth Centre from 2005 to 2010 and took part in the various activities and training programmes. He was also very active along with other animators in reaching out to the community during the Ebola pandemic and that of Coronavirus. Amounchen is very happy with the positive impact he received from the Don Bosco Youth Centre and is proud to be able to reach out to others as an animator.

Hard working Salesians and dedicated lay people in the Don Bosco Youth Centres continue to bring hope. They make a great impact on the lives of poor and needy young people in Liberia.