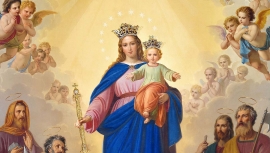 (ANS - Turin) - "Mary who tells": there is not, in the invocations of the Mother of Jesus, one that recalls this characteristic of hers. Yet one of her qualities is precisely that of having been a witness and communicator of the ineffable experience of generating and following the Savior. The famous altarpiece in the Basilica of Mary Help of Christians is also an expression of this commitment. Fr Enrico Lupano, one of the Valdocco Salesians engaged in welcoming pilgrims, sends an essay.

Mary, the dominant figure in the representation of the artist Tommaso Lorenzone, places the child she supports at the center of attention: as if to say that all Marian devotion is oriented to the great mystery of the Incarnation, from which the Hope that animates the Christian faith derives its reason. Mary tells of this unexpected Son, yet so desired by her and the whole human race: the announcement of the archangel Gabriel communicates the Will of God the Father, that of becoming part of the flesh that constitutes each person and of freeing him from natural limits to make it become life without time limits, good and eternal like Him.

The Woman who conceived the new Adam told the apostles what happened in her life. We can think of the prudence with which she spoke of the Annunciation, of Joseph's reaction, of the understanding of the mystery she had in the encounter with Elizabeth. She surely said a lot about the infant Son and his religious maturation.

Mary accompanied the frightened and questioning disciples after the infamous death on Calvary, helped them to reconstruct the difficult mosaic of His teachings, encouraged them to repeat the gestures He performed: the blessing of bread and wine, the sharing of prayer, the hands outstretched towards the sick… It is beautiful to note that the Feast of Mary Help of Christians falls every year very close to Pentecost, to say that the triggering of the fire of the announcement is to be flanked by the memory of the closeness that She gave to the followers of the first hour.

This is why the altarpiece of the Help of Christians does not limit itself to describing the Mother-Son relationship, but describes - it tells us - the development of the Church: the Word patiently distilled into the Gospels; the two major witnesses, Peter and Paul, servants of the inculturation of the kerygma; the apostles, the first missionaries sent to preach that man to all peoples.

In the altarpiece of the Basilica there is a summons to the Kingdom of God, which grows in Heaven with the angels who are its joyful standard-bearers, and on Earth with the workers of charity. In the places of Africa, Asia and Latin America where the sick and the dead do not have help; in rich nations where the individual feels lost in the mechanisms of society, the Mother of Jesus goes as quickly as to the house of Zechariah, and sends the resources of hearts transformed from stone into pulsating energy.

Mary is there, she listens, dialogues with all these children of the Light. She tells, to those who want to listen, of her loving support for those who struggle, who are seeking, see themselves as lost.

And she repeats what she said at Cana: "Do whatever He tells you": it is thus, pointing to the Son, who gives Her greatest help.