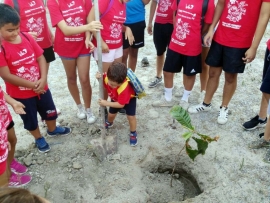 (ANS – New Rochelle) – Salesian Missions, the U.S. development arm of the Salesians of Don Bosco, joins humanitarian organizations and the international community in celebrating World Environment Day held annually on June 5. This year, World Environment Day marks the official launch of the UN Decade on Ecosystem Restoration, a 10-year drive to prevent, halt and reverse the degradation of ecosystems worldwide. The initiative will “draw together political support, scientific research and financial muscle to scale up restoration and revive millions of hectares of land and marine ecosystems.” Salesian missionaries have an ongoing focus on the environment in their organizations around the globe. And in honor of World Environment Day, Salesian Missions is proud to highlight Salesian green and restoration efforts in countries around the globe.

The Salesian oratory in Bova Marina, Italy, has joined the “Plant Your Tree” initiative, which was launched in the fall of 2019 by the Mondoverde Club, an environmental association. As part of the summer 2020 activities, close to 60 youth from the Salesian oratory planted saplings. Four teams of youth were created and each was responsible for planting one sapling.

Salesian staff and students in Lahore and Quetta, Pakistan, recently planted 100 trees on the campus grounds. In his 2020 Laudato Si’, Pope Francis underlined the importance of education and training that will help youth shape a lifestyle and foster environmental responsibility.

Don Bosco Pasil, in Cebu City, Philippines, launched the Mamma Margaret’s Garden last year. Pasil is one of the villages in Cebu City that is highly populated and the houses are densely packed. Availability of land for planting is very limited, so the project used recycled plastic bottles to plant fruits and vegetables.

Brother Julius Ysulan and Brother Raffy Besonia run the garden and provide weekly educational sessions on environmental issues. After the harvest, families had fruits and vegetables without having to use their limited money to buy them at the store.

This garden is one of many initiatives launched during the pandemic. Several Salesian organizations in the Philippines started farming and gardening projects to help provide food relief to families in need. An 8,000-square-meter soccer field at St. John Bosco Parish, located in Tondo, Manila, had its first harvest festival where anyone could pay and harvest vegetables. The initiative was launched in October 2020 and resulted in the first urban farm in Manila.

The project was launched by six agrarian reform beneficiaries from Cavite, who are known as farmer-scientists. They volunteered to teach the residents of Tondo skills and techniques in urban vegetable farming. After the initial training, Tondo residents planted squash, upo, kangkong, spinach, mustard, and pechay in the vegetable garden. The urban farm is benefiting people living in 17 barangays (neighborhoods) around the St. John Bosco Parish.