Rwanda – Poverty lived with dignity: a travelogue in Rwanda
Featured 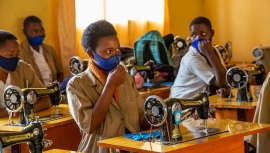 (ANS - Kigali) - For months, the pandemic has prevented visits to Salesian works around the world. Finally, after a long time, in some countries such as Rwanda, entry is again possible. Here, local authorities have adopted security protocols against the spread of the infection, which have made Rwanda one of the world's safest countries.

The capital Kigali won the cleanest city in Africa award. The small country located in the area of ​​the Great Lakes, on the line of the Equator, is experiencing a very particular economic development even though it does not possess the immense natural wealth of nearby Congo.

Unfortunately, Rwanda also has a record of atrocities that has occurred few times in history. The 1994 genocide is a fact that is difficult even to narrate. In just 100 days it is estimated that one million people died, especially women and children. The two ethnic groups of the place: the Hutus and above all the Tutsis saw their parents, brothers and children die in blood. The genocide in Rwanda was a collective shock that, after 27 years, struggles to be overcome.

On that occasion, the UN forced the European Salesian missionaries to get on a plane and go to safety in Belgium. But they replied that they would only board that plane of salvation if they also let their African Salesian confreres in, or they would remain to share the fate that would befall them, all together. So it was that they brought them all to safety and that as soon as the security conditions allowed, once again together they returned to Rwanda. They found the Salesian works devastated and completely looted. We had to start all over again.

Bro. Pettenon goes on to tell about the recent visit to the Salesian house in Butare. Here the Salesians have a large parish with a newly built church, thanks to the main intervention of the parishioners, of a size worthy of a cathedral. Then there is the vocational training center that trains cooks, welders, carpenters, bricklayers, hairdressers, seamstresses and there is also the Salesian Novitiate. It is the house of formation wherein young people who are preparing to be consecrated Salesians in the Salesian Congregation live, study and pray. This year the novices are 16 young people aged twenty to thirty from Uganda, Burundi, Rwanda and Central Africa.

“In the peripheries of cities, as well as in rural areas, living conditions are not easy,” writes Bro. Pettenon. “There is poverty, but not misery. And poverty is lived with dignity. Precisely in Butare, I was struck by situations of silent and almost hidden poverty in which the Salesians try to do everything possible to help these unfortunate ones,” he adds.

Finally, Bro. Pettenon tells of two girls, Nadine and Airenne, two Burundian refugees, just twenty years old, who fled with their brother after the war that broke out in recent years. “Their luck was to meet Don Bosco who was waiting for them beyond the border of their country. And they are extremely grateful to Don Bosco and his children because, they both reiterated, he has given us the opportunity to attend the course to become cooks, he has given us back our self-confidence and hope for the future.”

The complete text of this travel diary is available, in Italian, on the Missioni Don Bosco website: www.missionidonbosco.org