Brazil – 138 years of Salesian presence in the Country
Featured 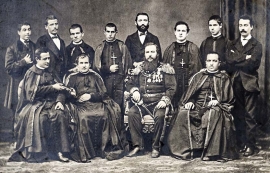 (ANS - Brasilia) - Yesterday, 14 July, the 138th anniversary of the arrival of the first Salesians in Brazil occurred on that date in 1883. In truth, “The first American land on which the Salesians set foot was Brazil. This happened in 1875, when the so-called First Missionary Expedition, which Don Bosco sent to Argentina, passed through Rio de Janeiro, the capital of the Brazilian Empire" (Os Salesianos No Brasil, Fr. Luiz MARCIGAGLIA, 1955, p.13). 14 July 1883, however, remains an important date in history because, that time, the Salesians came to stay.

The Sons of Don Bosco were welcomed "with extraordinary kindness by the Emperor Dom Pedro II, who showed the greatest interest in Salesian works. The first of which was the 'Santa Rosa' Institute in Niterói." (MARCIGAGLIA, 1955, pp.17-19).

The workshops of that work marked an epoch: educational work with the Vocational Training Schools began in July 1885 with workshops in typography, bookbinding, tailoring, shoemaking and carpentry, and they were pioneers in the private sector, preceded only by two similar institutions in the era of the so-called Empire.

Two years later the Salesian missionaries founded the “Coração de Jesus” high school in the city of São Paulo. In March 1890 they opened the "São Joaquim" institute in Lorraine in the interior of the State of São Paulo. And in 1892 the Daughters of Mary Help of Christians (FMA) also arrived in Brazil.

We cannot speak of the Salesian mission without mentioning the role of the Festive Oratories, one of the most important institutions of Don Bosco's educational project. The first was also based in Niterói, established on 30 June 1907.

And the "Santa Rosa" was a pioneer in yet other times, such as when in 1968 it started a literacy course for adults. Students learned to read and write in 30 days and in six months they reached fifth grade levels and could be sent to supplementary school.

And when it was decided to focus on Social Works, the CESAM (Salesian Center for Minor) was started at the “Santa Rosa”, aimed at helping young people to find their first job. The first CESAM was established in 1981.

In addition to all the work with young people in vulnerable situations, the Salesians were also involved in the missions. "From the beginning, the objective of the Salesians was to bring the Gospel to the indigenous people. They started with a government colony in Mato Grosso. Then they established missions on land they owned, among the Bororo of the eastern part of the state ... Later the missions on the Rio Negro and Rio Madeira were opened. Today, thanks to the integrated work with universities, the indigenous people have a school in their language and study their culture, as well as ours,” says Fr Antonio da Silva Ferreira, SDB.

The 1970s were a decade of great changes and in 1972 the Niterói school became a mixed institution, a school for boys and girls, again leading the way.

From 1883 to the present day, the Salesian mission begun by Don Bosco continues to expand in the country, through and thanks to the work at the service of the growth and development of young people.