RMG – Today the first Article is on: “DON BOSCO: THE DIGITAL AND VIRTUAL REALITY”
Featured 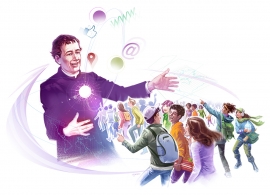 Over the next 12 months, I will present you with a series of articles under the banner of Don Bosco, the Digital and Virtual Reality. This month  I am sharing the first part of the series with you, entitled John Bosco: his vision and education from his childhood – the roots of a great communicator." (Fr Gildasio Mendes, General Councilor for Social Communication).

In this first article I focus on how arts and games played a decisive and important role in John Bosco’s education as a boy  and young man.

As art and games were so important for Don Bosco the communicator, I believe it continues to play a very central role in the lives of young people through digital media and social networking.

Let’s go together to find out when and how Don Bosco started to get involved in arts and games and how he developed his communication skills.

One necessary key to help us answer this question is to go back to his childhood and adolescence. His communication abilities have their roots in arts and relationships he developed as a boy in his hometown in Castelnuovo d’ Asti, near Turin.

John Bosco grew up having his mother, Margaret, as his guide and mentor. Through her love, care and deep faith, he was trained to express himself fully and to do his best to manage his life and to grow artistically and spiritually as a human being.

First, I would like to emphasise how arts and relationships in his boyhood contributed greatly to John Bosco’s development of  his communication abilities.

In the story of his life as represented in the MEMOIRS OF THE ORATORY, Don Bosco writes in a very simple and transparent way about what he liked doing, and how he was developing his skills in the field of music, games, theatre, tailoring, as well as his capacity for social relationships and leadership among his friends.

He described in simple terms how he liked music, even his gift of singing!

Since I had a good voice, I took up music wholeheartedly, and in a few months I could accompany him [John Roberto] with fair success (Memoirs of the Oratory MO p. 49).

The art of music and performance is a true school where an individual opens up and begins an inner journey. Through music, the boy John Bosco responded to his great desire to express himself, to follow his heart’s voice, provide room for his imagination and creativity.

When faced with the need to learn music, he realised the importance of discipline: singing required commitment, as did learning to play the piano. He began to understand that things happen in steps, that learning is the encounter between inner passion and discipline, intuition and rules, talent and the steps needed when learning something new.

This implicit educational realisation was important for John Bosco. It was then that he began to learn that everything in life requires talent, creativity, commitment and training.

In addition to music, he speaks of his skill with games. It is interesting that he describes how music, games, drama were things he did amid his studies. It shows how John Bosco started to develop discipline and awareness of the importance of developing physical, artistic, spiritual and study activities all together. He says  that:

In the midst of my studies and other interests, such as singing, music, speech training, and dramatics which I undertook wholeheartedly, I also learned a variety of new games: card tricks, marbles, quoits, walking on stilts, running and jumping, all of which I enjoyed and in which I was by no means mediocre, even if I was no champion (MO p. 66).

Don Bosco's great interest in and dedication to games demonstrates something greater about his abilities and his way of educating.

Writing on the importance of games in John Bosco, Arthur J. Lenti (2014) says that:

"Don Bosco not only recognized the usefulness of the game for leisure, but also for the integral development of the young person. For him, educating meant helping the young person to mature. The game is a necessary activity for the young person to reach maturity. To help them to sublimate certain inclinations, to get to know each other through competition with the other, and to recognize and control their own impulses" (Don Bosco, History and Spirit, vol 1, p. 99).

By learning music, performance, singing and playing games, he learned how to express himself freely and authentically. By exposing himself to the unknown of music and the risks involved in games, running and jumping, he gained a realistic and strong inner sense of what he could or could not do. John Bosco developed a sense of doing his best to achieve something, to accomplish something that motivated him to keep going, to learn more, to be better.

Arts like music, theatre and singing, demand that individuals reveal their true self, especially when they perform these things before others. They are occasions of evaluation, appreciation, criticism and praise.  Arts do not open any space for dissimulation or for revealing something about the self that is not true. If people say they can play a musical instrument, then they must be able to play it, show that they know what they are doing, otherwise they immediately open to criticism.   The arts truly reveal the real person.

Arts and games also allow the individual to experience a sense of freedom within rules. To learn music, for instance, one has to follow the rules of music, the ‘mathematics’ of music, the logic of games, the steps that all arts and sports require.

Through arts and games individuals express their creative imagination. Don Bosco’s artistic skills reveal much about his abilities to communicate. Pietro Broccardo says (2005),

By developing his fertile imagination aligned with his inspiration, discipline and the rules of various arts, the boy John Bosco embarked on a valuable path for developing himself in other areas such as study and human relations.

As he moved on to describe his many skills, he reveals an important motivation for performing music, arts and games:

At Becchi there was a field in which grew several trees. One of them, a pear tree that is still there, was very helpful to me then. I used to sling a rope to it from another tree some distance away. I had a table with a haversack on it, and on the ground a mat for the jumps. When I had everything set up and everyone  was eager to marvel at my latest feats, I would invite them to recite the rosary and sing a hymn (MO p. 39)

John Bosco was an outgoing person. He loved to reach out to people, get to know them, establish a relationship with them. Arts and games thus became important avenues for him to captivate an audience and educate his friends.

Earlier in life he started to understand the importance of language for communicating a Christian message.  Arts became a language for him. Games became a method of communication.  Interaction became a way of sharing and teaching something. Ultimately it is Interpersonal relationship that ended up playing a fundamental role in Don Bosco’s communication.

In addition, by developing relationships with his friends he grew up with a sense of knowing himself and others, how to negotiate with other’s opinions, how to persuade and lead with a sense of self-awareness, taking initiatives, learning from his mistakes, evaluating things and experiencing joy in the company of others.

By exposing himself to arts and relationships, John Bosco as a boy started to play with words, giving meaning to them, relating the words to their symbols, developing language skills, linking emotions to words, expressing his imagination through artistic actions, setting his thoughts and ideas in motion, gaining courage to relate to colleagues and even taking risks to perform well in whatever he did artistically.  By going through these steps, John Bosco the boy embarked on the long road that led to him being an original and authentic communicator.

Don Bosco learned to communicate through arts and games. He quickly understood that language is the key to communicating. He put his heart into his words. He experienced a sense of beauty and joy by doing all these things. He had a vision of a mystery that guided him. This became the motive that inspired him from within.

In the digital world these aspects are essential. Young people always know that.