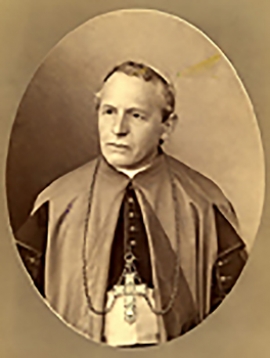 (ANS - Buenos Aires) - Giacomo Costamagna certainly plays a leading role among the missionary pioneers who have made the Salesian Congregation great, the first Salesian missionary to join the indigenous people of Ecuador, who was appointed Vicar Apostolic of Méndez y Gualaquiza, and who was above all a great animator and promoter of the whole Salesian mission in America. Because of the centenary of his death, which took place on 9 September 1921 in Bernal, Argentina, we commemorate his life and works.

Born in Caramagna, 30 km from Turin, on 23 March 1846, he met Don Bosco at the age of 12, when he was sent to study in Turin. He entered the Oratory, attended his studies and perfected his musical skills with another key figure of the Salesian missions, Giovanni Cagliero. Sensing his priestly and Salesian vocation, he was sent to study in Lanzo, where he shared his life with other clerics who would later become friends and companions, even though at a distance, in the mission lands: Luigi Lasagna, apostle in Uruguay and Brazil; and Giuseppe Fagnano, a missionary in Tierra del Fuego and on the Magellanic coast.

After having been the spiritual Director of the Daughters of Mary Help of Christians (FMA) in Mornese, he was entrusted with the leadership of the third Salesian Missionary Expedition, which in 1877 brought 17 Salesians and 6 FMA to Buenos Aires, including Sister Angela Vallese, also a great missionary in the Tierra del Fuego.

After many adventures, and with the encouragement and insistence of Don Bosco, on 17 April 1879 he left for Patagonia, accompanying the expedition of General Julio Argentino Roca in the desert, and administering numerous baptisms. And on the death of the first Provincial of Argentina, Fr Francesco Bodrato, he was appointed the new Superior of America. These were years of intense activity, in which he accompanied the work of his Salesians; in 1881 he visited homes in Uruguay, where he could witness the spirituality and zeal of the nascent communities.

In 1890, when Don Bosco died, Fr Rua called him to Italy to lead a new missionary expedition and delegated him to visit the Salesian houses on the Pacific coast, in Chile and Ecuador, while continuing his service as Provincial in Buenos Aires.

Having received episcopal nomination, he was consecrated bishop in Turin on 23 May 1895, but managed to visit the missionaries of his apostolic vicariate of Méndez y Gualaquiza, albeit for only three months and accompanied by the army, only in June 1902.

He participated in the Xth General Chapter of the Congregation in Turin in 1904, and then returned to South America, where he continued to maintain, in addition to the role of Vicar Apostolic, also that of being the Extraordinary Visitor to the Salesian works in the Pacific countries.

On 11 June 1914 he made his definitive entry into Mendez y Gualaquiza and devoted himself to the study of the Jíbaro language, later translating a catechism into the local language. He traveled as much as possible in the Vicariate and tried to paternally accompany the missionaries.

In mid-1918, feeling his health decline, he submitted his resignation to the Holy See and returned to Argentina; he spent his last years at the house of formation in Bernal, participating as much as possible in the life of the courtyard with the young.

There he died on 9 September 1921; but his missionary work continues to speak of him even today.