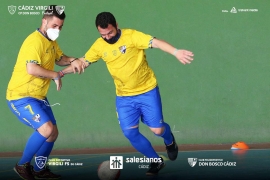 (ANS – New Rochelle) – Salesian Missions, the U.S. development arm of the Salesians of Don Bosco, joins humanitarian organizations and countries around the globe in honouring International Day of People with Disabilities. Since its inception in 1945, the United Nations has outlined and reiterated its commitment to calling for the creation of inclusive, accessible, and sustainable societies and communities. In 1981, the U.N. proclaimed Dec. 3 as a recognized day for the celebration of the achievements of people living with disabilities across the world.

This year’s theme “Fighting for rights in the post-COVID era” focuses on the challenges, barriers and opportunities for people who live with disabilities, in the context of a global pandemic.

Almost 1 billion people, or 15 percent of the world’s population, are living with a disability, according to the World Health Organization (WHO) World Report on Disability. Nearly 250 million are living with a mental or neurological condition, and almost two-thirds of these people will not seek professional medical help, largely due to stigma, discrimination and neglect.

“Children living in poverty with a disability are even less likely to attend school when compared to their peers,” said Father Gus Baek, director of Salesian Missions. “Youth with disabilities have the same ability to achieve as their peers if given the opportunity. Salesian missionaries in programs around the globe initiate projects that pave the way for advanced research, learning and innovation that aid inclusion of people with disabilities.”

Salesian Missions is proud to highlight Salesian programs that advance inclusivity and programming for people with disabilities on International Day of People with Disabilities 2021.

Don Bosco Popular Schools Network laid a foundation stone for a new building for the Centro Virgen Niña Association, which is part of the network. The funding for this project was provided by the Swiss Salesian organization Jugendhilfe Weltweit and fundraising efforts of the network staff.

Centro Virgen Niña Association is a special education center located in the city of El Alto, Bolivia, that serves many children and adolescents with disabilities. It was founded by Sister Grazia Micaelli and is run by a group of Bolivian lay people. The center started its activities 28 years ago with six children. Today, it serves 189 children and older youth.

The center focuses on human, social and educational development of children and families within the community. The new building was needed because the older building had architectural barriers that hindered people with disabilities who go to the center. The new infrastructure will consist of four floors with several classrooms and training workshops, administrative rooms, bathrooms, and corridors with ramps and steps to access the upper levels.

Don Bosco University in San Salvador, El Salvador, has inaugurated new facilities for the Faculty of Rehabilitation Sciences to empower the next generation of medical rehabilitation practitioners through its “Walking Anew!” project. This project was made possible thanks to a grant from the U.S. Agency for International Development’s (USAID) American Schools and Hospitals Abroad (ASHA) program secured by Salesian Missions.

The “Walking Anew!” project is expanding and upgrading the facilities at Don Bosco University’s School of Rehabilitation Science as well as the equipment used to train medical rehabilitation professionals. The project will also pioneer innovative techniques in the treatment of people with disabilities.

The construction of this new building, which will house the Applied Research Center, will allow for the exchange of information with professionals in the field at an international level as well as provide space for a new podiatry laboratory and other specialized practices. The program has already trained people from El Salvador, other countries in Central America, South America, Haiti, Angola and the Democratic Republic of the Congo.

Don Bosco University will also update technological infrastructure for the existing orthosis and prosthesis laboratories as well as for movement and gait analysis. Similarly, the Applied Research Center will be equipped with the necessary technology for the exchange of knowledge and experiences with physical and academic rehabilitation centers identified in the United States and Latin America.

People living with spinal cord injuries will have a new treatment center thanks to funding Salesian Missions received from USAID’s ASHA program for the “Raising Standards of Care for Spinal Cord Injury Patients” project. The project will construct and equip Mexico’s first comprehensive treatment and rehabilitation center to assist patients who have been paralyzed by spinal cord injuries, with a special focus on youth.

The project runs from October 2018 through the end of September 2023. Construction is currently underway. The Latin American Center for the Treatment of Spinal Cord Injuries, which will be built in Guadalajara, will be the only center in Mexico dedicated to serving the target population. The treatment center aims to promote the American values of equal access and opportunity by empowering young people with spinal cord injuries with the physical independence and renewed self-esteem needed to actively participate in society.

The state-of-the-art treatment and rehabilitation center will be equipped with cutting-edge technology and innovative resources. In addition to treating patients, the center will also generate and disseminate new science and technology. Within its first four years, it is anticipated that the center will treat 500 patients with spinal cord injuries, mainly youth and young adults between the ages of 12-35 who live in poverty and in a state of high vulnerability.

The team’s name honors George Eyser, the first Olympic athlete with a disability, who won six medals as a gymnast. The Eyser team was an initiative of the Don Bosco team’s coaches, Teresa Atero and Néstor Villegas, and has received the support of the Don Bosco Polideportivo Club and of the five-a-side soccer team Cadiz Virgili Futsal.

Cadiz Virgili Don Bosco currently has several teams engaged in tournaments and training. The teams are run by qualified and certified coaches who, with the support of the Salesian community, promote the individual care and development of athletes.

Villegas noted, “The new team for persons with disabilities is a team that five-a-side soccer needed, and we are fortunate to have qualified people to carry it forward. With this team, people with functional diversity will have a place and an opportunity to play sports, have fun, and learn and play five-a-side soccer.”

Salesian Father Rafael Cazorla, coordinator of the Salesian sports club, added, “We want to achieve greater integration in sport. It is very important to work in this direction and that is why we want this team to continue to grow and be able to compete in tournaments in the near future.”