RMG – Listening to the Congregation: an experience of synodality
Featured 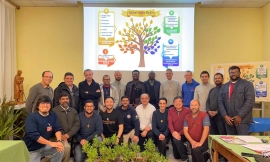 (ANS – Rome) – “Synodality is the watchword in the Church at the moment. In the last two weeks of November 2021, we here in the ‘Sede Centrale Salesiana’ lived a particularly intense moment of what can only be described as a synodal experience, an experience of walking together as brothers”. The General Councillor for Formation, Fr. Ivo Coelho, today offers ANS readers his reflection on the experience of the meeting for the revision of the Salesian Ratio, held in Rome from November 15 to 28, 2021.

The meeting was part of the process of revision of the Salesian Ratio asked for by the Rector Major, Fr Ángel Fernández Artime. After almost two years of preparation, consultation, study and questionnaires sent out to all confreres, Salesian communities and educative-pastoral communities, a group of 21 confreres from all over the world came together to listen to the feedback, interpret it and create some syntheses that could help the next step of actually drafting the new Ratio.

Part of this group were 7 young men in initial formation elected by their peers in another intensely synodal process involving several online meetings in each of the 7 regions of the congregation. I say “young men” and not “young Salesians,” because one of them was a prenovice from Korea who, in one sense, was “no novice,” because he came from a 10 year long experience in the Salesian Youth Movement in his country. The presence of young people brought a particular flavour to the meeting. For me, the reciprocity of the formation relationship became dramatically clear when one of them said to the group: “When the Rector Major said that our Congregation was wonderful, some of us used to smile quietly in disbelief. Now, thanks to this great group of Salesians, I know it is true.”

The work was intense and demanding, as one can easily imagine. Silvio Roggia, who was the coordinating the whole experience, calls it the most significant experience of synodality in all his Salesian life: “In addition to the contents and orientations that emerged from our listening exercise, a great insight for me came from the very clear evidence that ONLY TOGETHER was it possible to get to where we are after these two weeks of TEAMWORK. Of all the possible ways of living synodality this was for me one of the most significant so far in my Salesian life, also because we in turn were the voice of so many other realities (including the fundamental one of the lived history of each one, itself the fruit of so many faces...).”

The kind of fraternal communion established almost at once in this variegated group, despite linguistic barriers, was remarkable, to say the least. For me it was amazing to see people communicating with shreds of English or Italian, with much gesticulation, and always with great humour. Christian Becerra captures this beautifully: “Something that we experience when Salesians from all over the world meet is our family spirit. Although we have never met before, not even on a digital platform, it seems that somehow we have met before…”

I thought that was beautiful: even if we have never met, when we do meet we discover that somehow we have met before.

And accompanying the whole process was the prayer of hundreds of Salesians, lay people and members of the Salesian Family from all around the world. All discernment unfolds in adoration, in prayer, in dialogue with the word of God, as Pope Francis said at the opening of the synod on synodality.