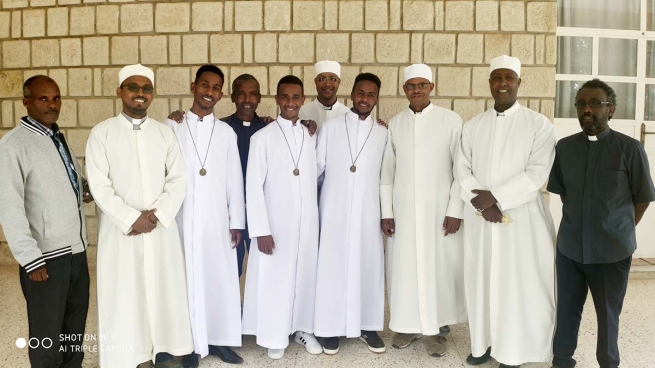 (ANS - Asmara) - The Salesian presence in Eritrea has strong roots and a future yet to be written. Started almost three decades ago, it represents a small but significant reality of the Salesian Congregation, which fully expresses that closeness to the neediest youth that has always characterized the mission of the Sons of Don Bosco.

The Salesians of Don Bosco present in the country today number 17 - nine priests, two Salesian coadjutors, and six students of Philosophy - to which must be added three Eritrean Salesians active abroad, in Italy and Ethiopia, for a total of 20 religious. But numbers do not say everything about the importance of this small group: in fact, from a historical point of view as well, the Eritrean roots are the basis of the Salesian presence in the entire Horn of Africa, given that the first Salesians who were not missionaries in neighboring Ethiopia were Eritreans.

In the 80s and 90s, Salesian Ethiopia was under two administrations: the South was dependent on Lombardo-Emiliana Italy (ILE); while the North was entrusted to the care of the Province of the Middle East (MOR), where the presence of Eritrean Salesians had a strong incidence. For this reason, when in 1995, the then Rector Major, Fr Egidio Viganò, met many Eritrean Salesians in Ethiopia, he decided the time was ripe to promote the launching of a Salesian mission in their native country.

This mission was founded at the beginning of June 1995, taking shape in a house in Dekhemare, south-east of Asmara, the capital. It was a mission that Fr Viganò had very much at heart, and in fact, shortly before his death, towards the end of that month, he said to his Salesians: "Remember, remember Dekhemare!

Today, the Dekhemare house remains not only the Mother House of the Eritrean Salesians but also their largest and most important work. Inside the house there is a large Vocational Training Centre (VTC), open to both boys and girls, with various courses of study (carpentry, automotive mechanics, electronics and electricity, construction...), and a boarding school; also, the aspirantate and novitiate for initial Salesian formation; a festive oratory, which welcomes and animates around 1,500 young people and which can organize five-a-side football tournaments with around a hundred registered teams; and a youth center with very characteristic features. Since the Salesian VTC, in accordance with the instructions of the authorities, is dedicated to young people from all over the country, the youth center is, on the other hand, especially aimed at young people from the city and the surrounding area, to whom it offers short courses, both professional (electricity, electronics, computer science...) and of a more artistic nature (dance, music, drawing...).

Ten years after the birth of the first work, the Salesians of Eritrea have started a second presence, in Asmara, which today serves as a formation house for post-novices and as a theological college.

And more recently, in 2018, the third and, for now, last presence was opened, in Barentù, in the southwest of the country, towards the border with Sudan, which is also characterized by the Salesian charismatic dimension of attention to the young people most at risk: it offers short-term vocational training courses, which are an educational lifeline for all those young people in the area - and there are many - who for various reasons have abandoned their studies.

Today the Salesians are the only expression of the Salesian Family present in Eritrea, but this does not mean that the charism is not spreading beyond the Sons of Don Bosco. Numerous are the past pupils who in these years have matured profound gratitude towards the Salesian education received; and for those of them who live in other countries, especially in Italy and Europe, the Salesians have started formative paths, which have already experienced the first gatherings or reunions in recent years.

At the level of government, the Salesian presence in Eritrea has kept pace with the evolutions that have marked the life of this country, especially in terms of relations with neighboring Ethiopia. Since 1998, the Salesian presence in the two countries has come under the sole administration of the Vice-Province of Mary "Kidane Meheret" of Africa Ethiopia Eritrea (AET), with headquarters in Addis Ababa, the capital of Ethiopia. But because of the war that broke out in that same year between Ethiopia and Eritrea - and which resulted in a closure of borders and communications until 2018 - joint animation has always been a challenge, so much so that for some years (2015-2020) the care of the Eritrean Salesian works was placed directly under the dependencies of the Rector Major.

Since 2020, precisely because of the reopening of borders and communications, the Salesian presence in Eritrean land is again conjugated to the Ethiopian one in the AET Vice-Province; and, like and in communion with the Ethiopian one, today it looks with suffering and dismay at the ongoing war in Tigray, a humanitarian tragedy of immense proportions, about which unfortunately little is said or written about.

The Salesians, who have been living and working in Eritrea for 27 years, are highly appreciated by the local Church and civil society for their educational and pastoral services, as well as for their social projects, carried out in collaboration with many Italian Salesian organizations (Fondazione Opera Don Bosco Onlus, Missioni Don Bosco, Fondazione DON BOSCO NEL MONDO, International Volunteers for Development...). And in the nation’s alternating fortunes and events, they always remain united and supportive at the side of the population.