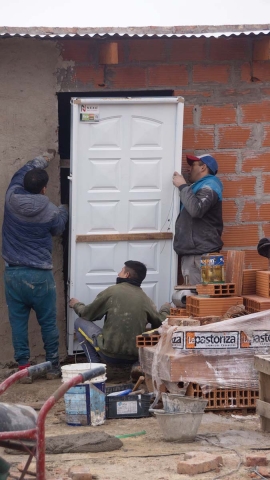 (ANS - Zarate) - At the Salesian work in Zarate, the "Hogar de Cristo" center welcomes people who want to detoxify from addiction. And they repair the pain in their lives by serving others.

Barrio Nuevo, Zarate, one hundred kilometers north of the city of Buenos Aires. It is a cloudy winter morning, where the cold is felt most keenly when the only shelter is one's coat. In a simple plot of land, a group of men distributes portions of stew; in total, about a hundred a day. They have been cooking since nine o'clock in the morning, and although they are not always the same, they have been doing it from Monday to Friday since last year. They started the activities from the day before, sharing breakfast, a prayer, and a chat.

Struck by life - and death - they made the decision to change. And this willingness opened to them the doors of the "Hogar de Cristo," where two basic rules apply: no substance use and no violence. For the rest, it doesn't matter what you have done or where you come from. There will be time for that. First, you are welcomed, you wait, you listen. Because the most important thing has already happened in deciding to get there, be there. As Tomás, 23, summarizes, "There are three possibilities before a person who uses substances: jailed, crazy or dead... And I didn't want any of those three things."

This is the motto of the "Hogar de Cristo," a concrete answer to the needs of drug addicts in the slums and poor neighborhoods, established a decade ago on the initiative of some "cura villeros" (slum priests) in Buenos Aires. The proposal was picked up five years ago by the Salesian work in Zarate, through the initiative of Fr. Antonio Fierens, who also opened a prevention space for children and adolescents every afternoon, Monday through Friday. In typical Salesian fashion, it aims to prevent before addiction even develops.

A further step was taken in 2021: the opening of foster homes for people who want to get out of addiction. This, as Salesians Fr. José García and Fr. Carlos Morena explain, is done through different stages or "thresholds," each in a different cottage, all very simple: "Anyone who arrives injured or 'broken,' will be welcomed with affection. After spending some time, the boys are taken to a farm, where they spend about four months, mainly to look inside themselves. It is very important for the addict to find out what his pain is. And not to cover it with some substance, but to heal it. Then the kids come here, in a new stage, where they are fortifying the tools to deal with substance use. And in a last threshold they can go to work, manage their money, try to recover their family, their children...," explains Fr. Morena, the Rector of the work.

The process is not always linear. Many relapse and return to drugs. But the "Hogar" still opens the door for them. "The first thing the kids do when they come in is eat and sleep, because they may have just spent a week 'high.' Within a few days, they regain their lost weight, because the drugs have made them want to eat," Fr. García continues. Although there are some younger ones, in general, they are over 30: "They reach an age when they can no longer bear to keep consuming and running away; their bodies say 'enough!'"

The same scene is repeated in a house in the Reysol neighborhood, in the halls of the "San Alfonso" chapel and the "San Jose" parish: the same people who are in recovery cook food for the "people's pots" (soup kitchens) that feed about 800 people from the surrounding areas every day.

"We get up early to prepare everything. It helps us feel useful. Many times, we used to steal from people. Kids who have nothing only know how to steal so they can do drugs or eat. Today we are on the other side, trying to do things right and not make the mistakes we made again. And people support us for what we do, even if there are others who don't understand," says Raúl, 48.

He is one of the "au pairs," people who have managed to overcome addiction and coordinate life in each home. "I have been 'clean' for a year and eight months. It's difficult; I'm still struggling. Addiction is not cured; it is treated. I live together with addicts. We help each other because we understand each other, we can talk," he adds.

It is the people who have lived through the tragedy of addiction - and survived - who expose a society that leaves out a growing segment of the population, without the opportunity to earn a living with dignity, to get an education, to sit at the table as a family. "We need society not to turn away, but to help, to ask questions. We need to understand why that boy is like that, why he steals, why he does drugs, what is his pain, what happened in his life...talk about it," Raúl summarizes.

At Barrio Nuevo, portions of stew have already been distributed among neighbors, and the boys shared lunch with Fr. Moreno. "Nacho," 35, who used to work as a mason, now coordinates the work. They are building a simple little house where other people who need to recover from addictions can come to live. "When I arrived at the 'Hogar' they kept me in a warm place, with a bed and a blanket. So I, with my heart, try to do that so that other kids, when they come, have a place to stay, a decent place," says Nacho, as he puts the new door to the small cottage, a door that will always be open.